Shrewsbury is the county town of Shropshire, England. It is on the River Severn and has a population of approximately 72,000. Shrewsbury is a market town whose centre has a largely unspoilt medieval street plan and over 660 listed buildings, including several examples of timber framing from the 15th and 16th centuries. Shrewsbury Castle, a red sandstone fortification, and Shrewsbury Abbey, a former Benedictine monastery, were founded in 1074 and 1083 respectively by the Norman Earl of Shrewsbury, Roger de Montgomery.

The town is the birthplace of Charles Darwin. Horticulture remains popular, and the Shrewsbury Flower Show is one of the largest horticultural events in England. Located 14 km east of the Welsh border, Shrewsbury serves as the commercial centre for Shropshire and mid-Wales, with a retail output of over £299 million per year and light industry and distribution centres, such as Battlefield Enterprise Park, on the outskirts. The A5 and A49 trunk roads cross near to the town, and five railway lines meet at Shrewsbury railway station. 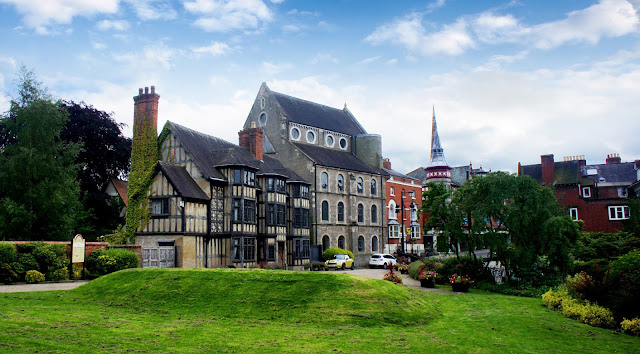