The street plan of Milan, with streets either radiating from the Duomo or circling it, indicates that the Duomo occupied the most important site in the ancient Roman city of Mediolanum. Saint Ambrose built a new basilica on this site at the beginning of the 5th century, with an adjoining basilica added in 836. When fire damaged both buildings in 1075, they were rebuilt as the Duomo.

In 1386 the archbishop, Antonio da Saluzzo, began the new project in a rayonnant Late Gothic style that is more characteristic of France than Italy. Work proceeded for generations. The main spire was topped in 1762 with a polychrome statue of the Madonna, to whom the Duomo and its predecessor have always been dedicated. Even now, some uncarved blocks remain to be turned into sculpture. Gothic construction on the rest of the Duomo was largely complete in the 1880s. The Duomo was recently under major renovations and cleaning for several years, obscuring the west front with scaffolding. Works were finally completed in 2009, revealing the newly-cleaned façade in all its glory.

Milan Cathedral is 157 meters long and 40,000 people can fit comfortably within. The Duomo of Milan blurs the distinction between Gothic and neo-Gothic, for the Gothic west front was begun in 1616 and completed 200 years later. Only in its details does it reveal its Baroque and Neo-Classical date. From 1900 some of the less Gothic details of the facade were replaced in a true Gothic style, to designs of Giuseppe Brentano.The roofline dissolves into openwork pinnacles that are punctuated by a grove of spires, topped with statues that overlook the city. The main spire is 109 meters high. These can all be investigated up close on a breathtaking walk on the roof.

The huge building is made of brick faced with marble from the quarries that Gian Galeazzo Visconti donated in perpetuity to the cathedral chapter. The cathedral's five wide naves are reflected in the hierarchic openings of the facade. Even the transepts have aisles. The great windows of the choir are reputed to be the largest in the world. 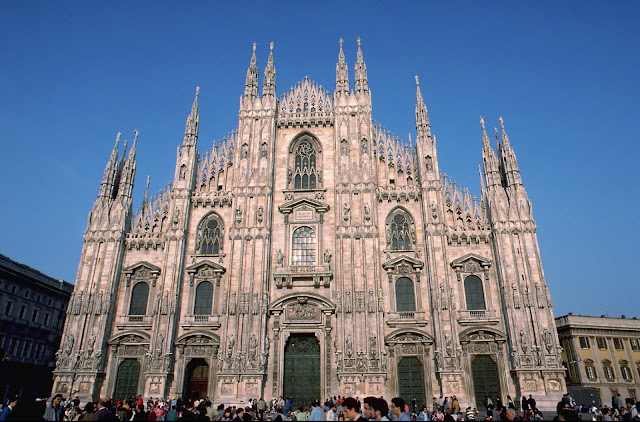 Posted by Melbourne Australia Photos at 10:49