The island of Poros is situated off the East coast of the Peloponnesus, a stone’s throw away from the little coastal town of Galatas.  Less than an hour’s journey from Athens' port, Piraeus, on the Flying Dolphin hovercraft, it is a magical place to visit, exemplifying in many ways the picture of a Greek island most people have in their imagination.

It is a small place, in reality two islands that are joined together by a short isthmus. The smaller of the two, Sphaeria, and the larger Calavria. Ancient settlements on both islands are known from references in ancient authors, but little now remains in the form of ruins. A few slabs of marble from a temple of Poseidon on a wind-blown hill surrounded by pine trees, schinum bushes and yellow stubbly summer-dried grass is enough to evoke ancient mysteries while one gazes at the deepest azure of the sea stretching out to the horizon.

What a magical place those few ruins become in the searing shimmering heat of Greek midsummer!  The drone of the cicadas is made more intense by the heat and the sparkle of the sea while the far-off susurration of the waves breaking gently on the shore is enough to transport one to another age.  How easy it is to imagine the centuries past crumble into insignificance while one is watching the crystal waters of the Aegean lap the embroidered scalloped shores...

Bathing in those same waters while the heat is at its most intense is easily accomplished at any of a hundred or more suitable places all around the coast.  A little to the North of the Neorion bay about 100 meters from the main road joining the two islands is an enchanting little cove, “Love Bay”.  The water is an aqueous greenish blue, crystal clear, reflecting the overhanging pine boughs from the trees that grow almost to the water’s edge. 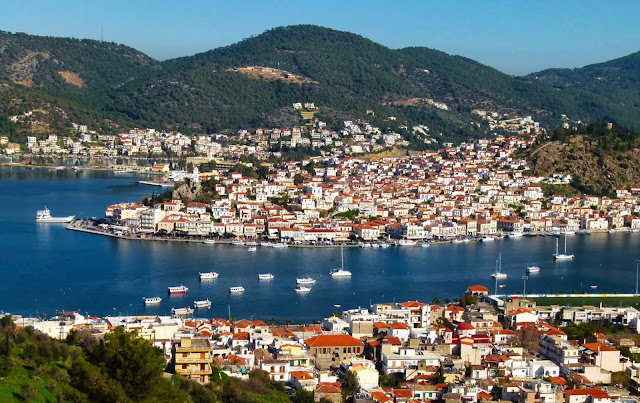 Posted by Melbourne Australia Photos at 16:11