Rice (Oryza sativa) is a grain belonging to the grass family. The plant, which needs both warmth and moisture to grow, measures about 2 metres tall and has long, flat, pointed leaves and stalks bearing clusters of flowers producing the grain. It takes between 3 and 6 months for a rice plant to reach maturity. On average, farmers need 2,000 litres of water to produce one kilogram of rice, the plant needing to grow in flooded fields (rice paddies). Rice is one of the few foods that is non-allergenic and gluten-free. Scientists believe there are about 140,000 varieties of cultivated rice.

Rice is one of the world’s staple foods and to give you an idea of the enormous scale of its cultivation, here are some astounding figures: In the year 2003, the world produced about 589 million tonnes of paddy rice. Most of that (≈534 million tonnes) was grown in Asia. In 2002, it is estimated that rice fields covered almost 1.5 million square km of land. Again, most of those fields are in Asia - around 1.3 million square km. When all developing countries are considered together, rice provides 30% of people’s energy intake and 20% of their dietary protein. Whenever I have visited SE Asian countries I have been impressed by the enormous tracts of land that are devoted to rice cultivation. I guess that is why most people have a typical image of the Far East in their mind and this image at some point includes a flooded rice paddy…

Today, rice is grown and harvested on every continent except Antarctica, where conditions make its growth impossible (not much is grown as a crop in Antarctica!). The majority of all rice produced comes from India, China, Japan, Indonesia, Thailand, Burma, and Bangladesh. Asian farmers still account for 92% of the world's total rice production. Talking with a Chinese colleague, I was told that rice in Asian countries is viewed very much as bread is viewed by the Europeans. Just as in the Southern Mediterranean countries bread was the basis of every meal, in Asian countries boiled or steamed rice is the basis of every meal.

Rice and its by-products are used for making straw and rope, paper, wine, crackers, beer, cosmetics, packing material, and even toothpaste! Now for that risotto recipe. Risotto is a classic dish of Italy prepared with special varieties of rice rich in starch, especially the Arborio type, and there are a multitude of recipes and variations. They all have as common feature the toasting of the rice with butter or olive oil, before broth is added to cook the grains thoroughly. 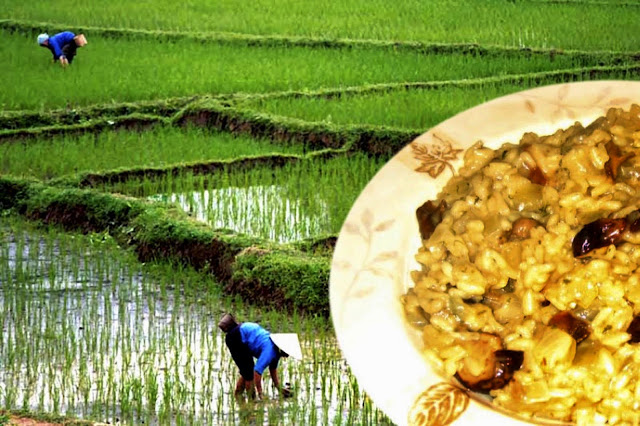 Posted by Melbourne Australia Photos at 17:40