"S" stands for Summer, sea, sand and St Kilda Beach in Melbourne. St Kilda is an inner suburb of the metropolitan area of Melbourne, Victoria, Australia, 6 km south-east of Melbourne's Central Business District. Its local government area is the City of Port Phillip. At the 2011 Census, St Kilda had a population of 17,795. St Kilda was named after a schooner, Lady of St Kilda (which moored at the main beach for much of 1841) by Charles La Trobe, and the ship's master and early settler Lieutenant James Ross Lawrence.

During the Victorian and Edwardian eras, St Kilda became a favoured suburb of Melbourne's elite, and many palatial mansions were constructed along its hills and waterfront. Shortly after the turn of the 20th century, St Kilda served a similar function for Melburnians as did Coney Island to the residents of New York City and its history draws an interesting parallel.

St Kilda is home to many of Melbourne's famous visitor attractions including Luna Park, the Esplanade Hotel, Acland Street and Fitzroy Street. It is home to St Kilda Beach, Melbourne's most famous beach, several renowned theatres and several of Melbourne's big events and festivals. Considering its popularity and the large number of visitors, St Kilda beach is quite clean and well-looked after. 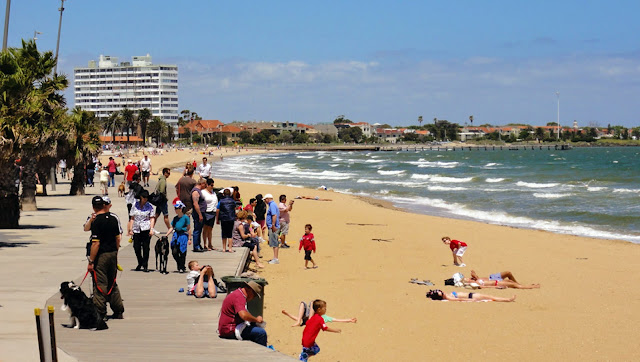 Posted by Melbourne Australia Photos at 17:26