Hoverflies, sometimes called flower flies, or syrphid flies, make up the insect family Syrphidae. As their common name suggests, they are often seen hovering or nectaring at flowers; the adults of many species feed mainly on nectar and pollen, while the larvae (maggots) eat a wide range of foods. In some species, the larvae are saprotrophs, eating decaying plant and animal matter in the soil or in ponds and streams. In other species, the larvae are insectivores and prey on aphids, thrips, and other plant-sucking insects.

Aphids alone cause tens of millions of dollars of damage to crops worldwide every year; because of this, aphid-eating hoverflies are being recognised as important natural enemies of pests, and potential agents for use in biological control. Some adult syrphid flies are important pollinators. About 6,000 species in 200 genera have been described. Hoverflies are common throughout the world and can be found on all continents except Antarctica. Hoverflies are harmless to most other animals, despite their mimicry of more dangerous wasps and bees, which wards off predators. 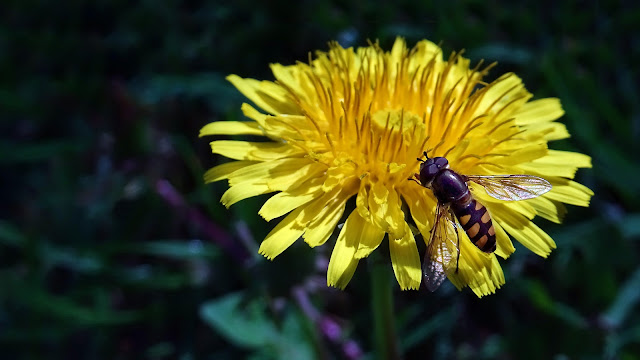