Xerography or electrophotography is a dry photocopying technique. Its fundamental principle was invented by American physicist Chester Carlson and based on Hungarian physicist Pál Selényi's publications. Chester Carlson applied for and was awarded U.S. Patent 2,297,691 on October 6, 1942.

The technique was originally called electrophotography. It was later renamed xerography — from the Greek roots ξηρός xeros, "dry" and -γραφία -graphia, "writing" — to emphasise that, unlike reproduction techniques then in use such as cyanotype, this process used no liquid chemicals. Carlson's innovation combined electrostatic printing with photography, unlike the dry electrostatic printing process invented by Georg Christoph Lichtenberg in 1778.

Carlson's original process was cumbersome, requiring several manual processing steps with flat plates. It was almost 18 years before a fully automated process was developed, the key breakthrough being use of a cylindrical drum coated with selenium instead of a flat plate. This resulted in the first commercial automatic copier, the Xerox 914, being released by Haloid/Xerox in 1960. Before that year, Carlson had proposed his idea to more than a dozen companies, but none were interested. Xerography is now used in most photocopying machines and in laser and LED printers. 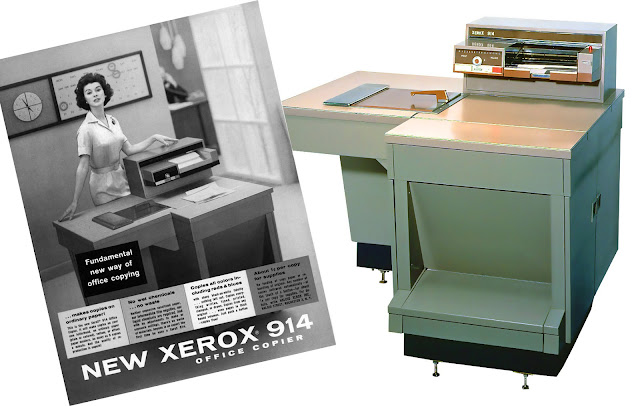