Lilium (members of which are true lilies) is a genus of herbaceous flowering plants growing from bulbs, all with large prominent flowers. Lilies are a group of flowering plants which are important in culture and literature in much of the world. Most species are native to the temperate northern hemisphere, though their range extends into the northern subtropics. Many other plants have "lily" in their common name but are not related to true lilies.

Lilies are tall perennials ranging in height from 60–180 cm. They form naked or tunicless scaly underground bulbs which are their organs of perennation. In some North American species the base of the bulb develops into rhizomes, on which numerous small bulbs are found. Some species develop stolons. Most bulbs are buried deep in the ground, but a few species form bulbs near the soil surface. Many species form stem-roots. With these, the bulb grows naturally at some depth in the soil, and each year the new stem puts out adventitious roots above the bulb as it emerges from the soil. These roots are in addition to the basal roots that develop at the base of the bulb.

The flowers are large, often fragrant, and come in a wide range of colours including whites, yellows, oranges, pinks, reds and purples. Markings include spots and brush strokes. The plants are late spring- or summer-flowering. Flowers are borne in racemes or umbels at the tip of the stem, with six tepals spreading or reflexed, to give flowers varying from funnel shape to a "Turk's cap". The tepals are free from each other, and bear a nectary at the base of each flower. The ovary is 'superior', borne above the point of attachment of the anthers. The fruit is a three-celled capsule.

Oriental lilies are based on hybrids within the Lilium section, specifically Lilium auratum and Lilium speciosum, together with crossbreeds from several species native to Japan, including Lilium nobilissimum, Lilium rubellum, Lilium alexandrae, and Lilium japonicum. They are fragrant, and the flowers tend to be outward facing. Plants tend to be tall, and the flowers may be quite large. The whole group are sometimes referred to as "stargazers" because many of them appear to look upwards. 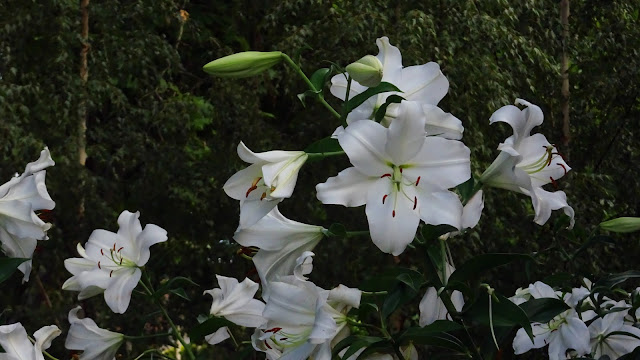