Vanilla is a flavouring agent derived from orchids of the genus Vanilla, in the Orchidaceae family, primarily from the Mexican species, flat-leaved vanilla (V. planifolia). The word vanilla, derived from the diminutive of the Spanish word vaina (vaina itself meaning sheath or pod), is translated simply as “little pod”. Pre-Columbian Mesoamerican people cultivated the vine of the vanilla orchid, called tlilxochitl by the Aztecs. Spanish conquistador Hernán Cortés is credited with introducing both vanilla and chocolate to Europe in the 1520s.

Initial attempts to cultivate vanilla outside Mexico and Central America proved futile because of the symbiotic relationship between the vanilla orchid and its natural pollinator, the local species of Melipona bee. Pollination is required to set the fruit from which the flavouring is obtained. In 1837, Belgian botanist Charles François Antoine Morren discovered this fact and pioneered a method of artificially pollinating the plant. The method proved financially unworkable and was not deployed commercially. In 1841, Edmond Albius, a slave who lived on the French island of Réunion in the Indian Ocean, discovered at the age of 12 that the plant could be hand-pollinated. Hand-pollination allowed global cultivation of the plant.

Three major species of vanilla currently are grown globally, all of which derive from a species originally found in Mesoamerica, including parts of modern-day Mexico. They are V. planifolia (synonym V. fragrans), grown on Madagascar, Réunion, and other tropical areas along the Indian Ocean; V. tahitensis, grown in the South Pacific; and V. pompona, found in the West Indies, and Central and South America. The majority of the world’s vanilla is the V. planifolia species, more commonly known as Bourbon vanilla (after the former name of Réunion, Île Bourbon) or Madagascar vanilla, which is produced in Madagascar and neighbouring islands in the southwestern Indian Ocean, and in Indonesia.

Vanilla is the second-most expensive spice after saffron, because growing the vine and producing the vanilla seed pods is labour-intensive. Despite the expense, vanilla is highly valued for its flavour. As a result, vanilla is widely used in both commercial and domestic baking, perfume manufacture, and aromatherapy.

Vanilla grows as a vine, climbing up an existing tree (also called a tutor), pole, or other support. It can be grown in a forest (on trees), in a plantation (on trees or poles), or in a “shader”, in increasing orders of productivity. Its growth environment is referred to as its terroir, and includes not only the adjacent plants, but also the climate, geography, and local geology. Left alone, it will grow as high as possible on the support, with few flowers. Every year, growers fold the higher parts of the plant downward so the plant stays at heights accessible by a standing human. This also greatly stimulates flowering.

Flowers are greenish-yellow, with a diameter of 5 cm. They last only a day, and must be pollinated manually, during the morning, if fruit is desired. The plants are self-fertile, and pollination simply requires a transfer of the pollen from the anther to the stigma. If pollination does not occur, the flower is dropped the next day. In the wild, there is less than 1% chance that the flowers will be pollinated, so in order to receive a steady flow of fruit, the flowers must be hand-pollinated when grown on farms.

Fruit is produced only on mature plants, which are generally over 3 m long. The fruits are 15-23 cm long pods (often incorrectly called beans). Outwardly they resemble small bananas. They mature after about five months, at which point they are harvested and cured. Curing ferments and dries the pods while minimising the loss of essential oils. Vanilla extract is obtained from these pods.

The major chemical components from the pods are vanillin, vanillic acid, 4-hydroxybenzaldehyde and 4-hydroxybenzoic acid. Natural vanilla extract is a mixture of several hundred different compounds in addition to the main ones listed previously. Artificial “vanilla essence” is often a solution of pure vanillin, of synthetic origin. Because of the scarcity and expense of natural vanilla extract, synthetic preparation of its predominant component has long been of interest. The first commercial synthesis of vanillin began with the more readily available natural compound eugenol. Today, artificial vanillin is made either from guaiacol or lignin. Lignin-based artificial vanilla flavouring is alleged to have a richer flavour profile than oil-based flavouring; the difference is due to the presence of acetovanillone, a minor component in the lignin-derived product that is not found in vanillin synthesised from guaiacol.

Vanilla was cultivated for use as a flavouring by pre-Columbian Mesoamerican people; at the time of their conquest by Hernán Cortés, the Aztecs used it as a flavouring for drinking chocolate. Europeans became aware of both chocolate and vanilla around 1520. The major use of vanilla nowadays is as a flavouring, usually in sweet foods. The ice cream and chocolate industries together comprise 75% of the market for vanillin as a flavouring, with smaller amounts being used in confections and baked goods.

Vanillin is also used in the fragrance industry, in perfumes (unfortunately for me – as I find these perfumes quite distasteful!), and to mask unpleasant odours or tastes in medicines, livestock fodder, and cleaning products. It is also used in the flavour industry, as a very important keynote for many different flavours, especially creamy profiles such as creamy soda.

Vanillin has been used as a chemical intermediate in the production of pharmaceuticals and other fine chemicals. In 1970, more than half the world’s vanillin production was used in the synthesis of other chemicals, but as of 2004, this use accounts for only 13% of the market for vanillin. Additionally, vanillin can be used as a general-purpose stain for developing thin layer chromatography plates to aid in visualising components of a reaction mixture. This stain yields a range of colours for these different components. Vanillin–HCl staining can be used to visualise the localisation of tannins in cells.

In the language of flowers the vanilla orchid signifies the sentiment: “My pure love will overcome all obstacles”. A vanilla pod indicates “my affection has turned to sweet love.” 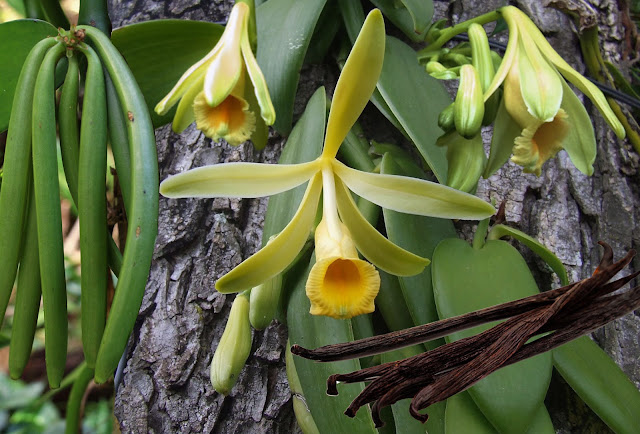 Posted by Melbourne Australia Photos at 15:38