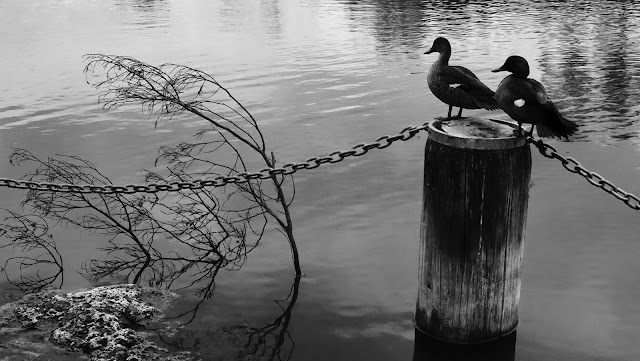 A wonderful sunset in Sicily, at a fishing port.

Magnolia × soulangeana (saucer magnolia) is a hybrid plant in the genus Magnolia and family Magnoliaceae. It is a deciduous tree with large, early-blooming flowers in various shades of white, pink, and purple. It is one of the most commonly used magnolias in horticulture, being widely planted in the British Isles, especially in the south of England; Australia; and in the United States, especially the east and west coasts.

Magnolia × soulangeana flowers are large, commonly 10–20 cm across, and coloured various shades of white, pink, and maroon. An American variety, 'Grace McDade' from Alabama, is reported to bear the largest flowers, with a 35 cm (14 in) diameter, white tinged with pinkish-purple. Another variety, Magnolia x soulangeana 'Jurmag1', is supposed to have the darkest and tightest flowers. The exact timing and length of flowering varies between named varieties, as does the shape of the flower. Some are globular, others a cup-and-saucer shape. 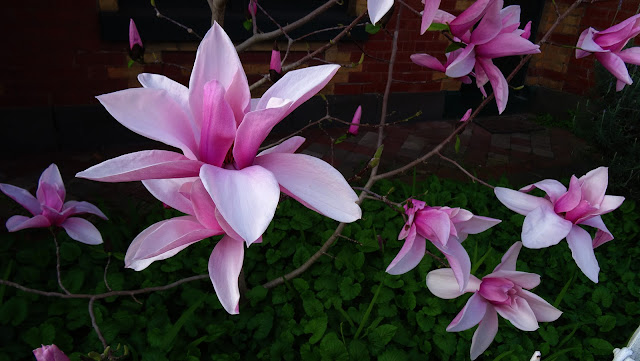 Adelaide is the capital city of South Australia and the fifth-largest city in Australia. According to the 2011 census, on 9 August 2011 Adelaide had a population of 1.23 million. The demonym "Adelaidean" is used in reference to the city and its residents. Adelaide is north of the Fleurieu Peninsula, on the Adelaide Plains between the Gulf St Vincent and the low-lying Mount Lofty Ranges which surround the city. Adelaide stretches 20 km from the coast to the foothills, and 90 km from Gawler at its northern extent to Sellicks Beach in the south.

Named in honour of Adelaide of Saxe-Meiningen, queen consort to King William IV, the city was founded in 1836 as the planned capital for a freely settled British province in Australia. Colonel William Light, one of Adelaide's founding fathers, designed the city and chose its location close to the River Torrens in the area originally inhabited by the Kaurna people. Light's design set out Adelaide in a grid layout, interspaced by wide boulevards and large public squares, and entirely surrounded by parkland. Early Adelaide was shaped by religious freedom and a commitment to political progressivism and civil liberties, which led to the moniker "City of Churches".

As South Australia's seat of government and commercial centre, Adelaide is the site of many governmental and financial institutions. Most of these are concentrated in the city centre along the cultural boulevard of North Terrace, King William Street and in various districts of the metropolitan area. Today, Adelaide is noted for its many festivals and sporting events, its food, wine and culture, its long beachfronts, and its large defence and manufacturing sectors. It ranks highly in terms of liveability, being listed in the Top 10 of The Economist's World's Most Liveable Cities index in 2010, 2011 and 2012. It has also been ranked the most liveable city in Australia by the Property Council of Australia in 2011, 2012 and again in 2013.

Three views of the city of Perth in Western Australia - it is the state capital and the largest city in the state.

This post is part of the Our World Tuesday meme.

An old window in a derelict building. 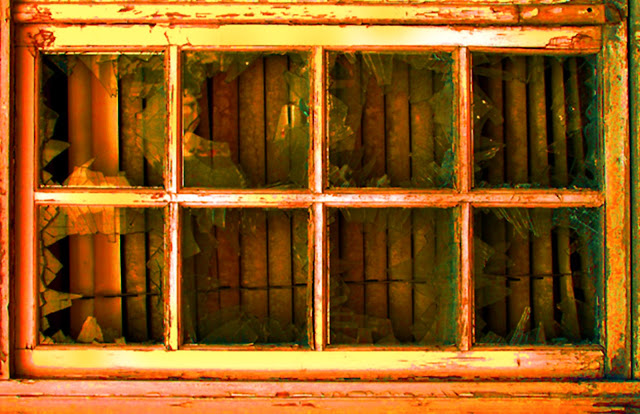 The azaleas have started to bloom in the garden. Spring is definitely on its way! 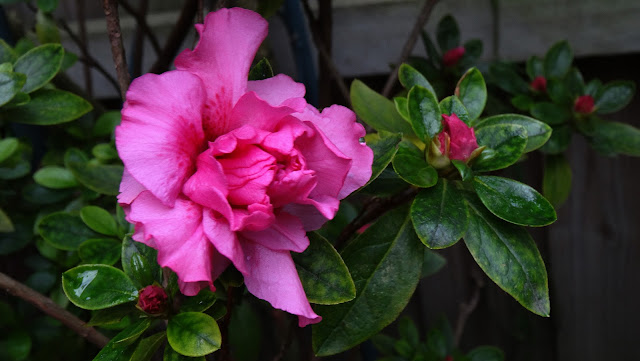 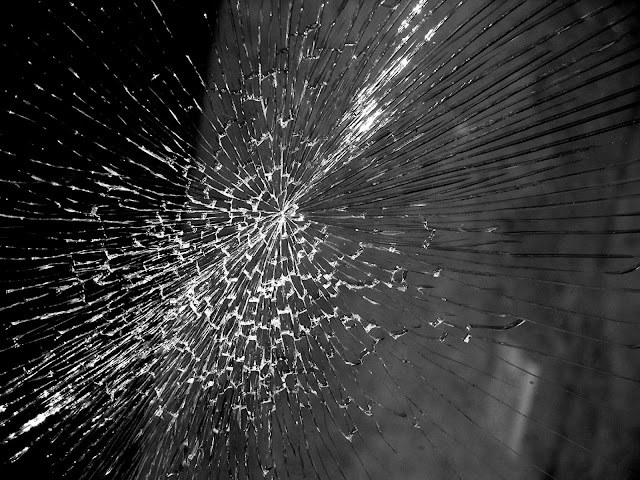 A wintry sunset in suburban Melbourne.

Acacia aculeatissima or 'snake wattle' is an attractive shrub for drier shady gardens or planting under established trees. It tolerates dry periods once the plant is established. It has fine, prickly foliage 5-12mm x 0.5-1mm with 4 veins, often bent downwards.
There are 1-3 oval/ball-shaped flowers on individual stalks in leaf axils, lemon-yellow in colour, flowering in late Winter/early Spring.

Cochem is the seat of and the biggest area in the Cochem-Zell district in Rhineland-Palatinate, Germany. With just under 5,000 inhabitants, Cochem falls just behind Kusel, in the like-named district, as Germany's second smallest district seat. Since 7 June 2009, it has belonged to the Verbandsgemeinde of Cochem.

The town centre with the outlying centre of Sehl upstream lies on the Moselle River's left bank, while the constituent centre of Cond lies on its right. A further constituent centre, Brauheck, with its commercial area, air force barracks and new town development, lies in the heights of the Eifel on Bundesstraße 259, some 2 km from the town centre. Emptying into the Moselle in Cochem are the Kraklebach, the Ebernacher Bach, the Sehlerbach, the Falzbach, the Märtscheltbach and the Enthetbach.

The quality of these digital photos is not that great, but considering they were taken with one of the first digital cameras, in June 1999, they are not too bad. The beautiful vineyards lining the banks of the river and terracing the hills surrounding it are quite amazing. The wine produced is of course world-famous!

Zürich is the largest city in Switzerland and the capital of the canton of Zürich  It is located in north-central Switzerland at the northwestern tip of Lake Zürich  The municipality has approximately 390,000 inhabitants, and the Zürich metropolitan area 1.83 million. Zürich is a hub for railways, roads, and air traffic. Both Zürich Airport and railway station are the largest and busiest in the country.

Permanently settled for around 2000 years, the history of Zürich goes back to its founding by the Romans, who, in 15 BC, called it Turicum. However, early settlements have been found dating back more than 6400 years ago. During the Middle Ages Zürich gained the independent and privileged status of imperial immediacy and, in 1519, was the place of origin and centre of the Protestant Reformation in German-speaking Switzerland, led by Ulrich Zwingli.

Zürich is a leading global city and among the world's largest financial centres. The city is home to a large number of financial institutions and banking giants. Most of Switzerland's research and development centres are concentrated in Zürich and the low tax rates attract overseas companies to set up their headquarters there. According to several surveys from 2006 to 2008, Zurich was named the city with the best quality of life in the world as well as the wealthiest city in Europe. Many museums and art galleries can be found in the city, including the Swiss National Museum and the Kunsthaus. Zurich also hosts one of the most important theatres in the German-speaking world.

Cymbidium orchids are grown for their spectacular and colourful flowers. Due to the success of modern breeding programs they now come in a fantastic range of colours, from white and pink through to oranges, apricots, browns, reds, burgundy, yellows, creams and greens. Once in flower cymbidiums can be brought indoors and the flower display can be enjoyed for many weeks.  In an unheated room the flowers will last up to three months. In heated areas the flowers don't last as long, but it will help if you at least put the plants outside at night.

Overlooking the Spencer St Railway Station, this newish apartment building of many storeys manages to add yet another upward thrust into the city sky. Makes for interesting photos, even though I am reminded of cages...

Fuchsia is a genus of flowering plants that consists mostly of shrubs or small trees. The first, Fuchsia triphylla, was discovered on the Caribbean island of Hispaniola (present day Dominican Republic and Haiti) in about 1696-1697 by the French Minim monk and botanist, Charles Plumier during his third expedition to the Greater Antilles. He named the new genus after the renowned German botanist Leonhart Fuchs (1501–1566). 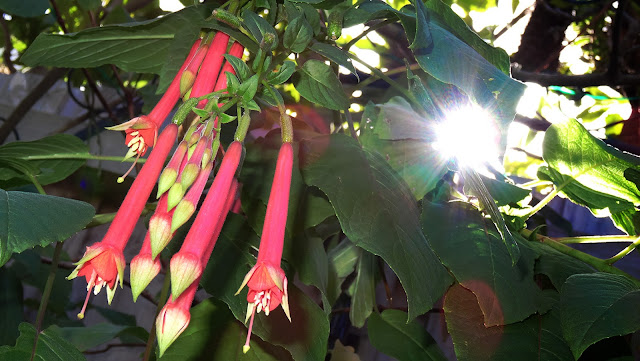 Taking photos from approximately the same spot in my hotel room In Brisbane, Queensland, Australia.

Canola was developed through conventional plant breeding from rapeseed, an oilseed plant already used in ancient civilisation as a fuel. The word "rape" in rapeseed comes from the Latin word rapum meaning turnip. Turnip, rutabaga, cabbage, Brussels sprouts, mustard, and many other vegetables are related to the two natural canola varieties commonly grown, which are cultivars of Brassica napus and Brassica rapa. The change in name serves to distinguish it from natural rapeseed oil, which has much higher erucic acid content.

Brassica oilseed varieties are some of the oldest plants cultivated by humanity, with documentation of its use in India 4,000 years ago, and use in China and Japan 2,000 years ago. Its use in Northern Europe for oil lamps is documented to the 13th century. Its use was limited until the development of steam power, when machinists found rapeseed oil clung to water- or steam-washed metal surfaces better than other lubricants. Canola oil is made at a processing facility by slightly heating and then crushing the seed.

Almost all commercial grade canola oil is then refined using hexane. Finally, the crude oil is refined using water precipitation and organic acid, "bleaching" with clay, and deodorizing using steam distillation. Approximately 43% of a seed is oil. What remains is a rapeseed meal that is used as high quality animal feed. Canola oil is a key ingredient in many foods. Its reputation as a healthy oil has created high demand in markets around the world, and overall it is the third most widely consumed vegetable oil in the world.