Clivia miniata (Natal lily, bush lily) is a species of flowering plant in the genus Clivia of the family Amaryllidaceae, native to damp woodland habitats in South Africa (Western Cape, Gauteng and KwaZulu-Natal provinces) as well as in Swaziland. It is also reportedly naturalised in Mexico.

It grows to a height of about 45 cm, and flowers are red, orange or yellow, with a faint, but very sweet perfume. It is sometimes known in cultivation as "Kaffir lily". However, this name is also confusingly applied to the genus Schizostylis, and in any case is best avoided as it is considered an offensive ethnic slur in South Africa.

With a minimum temperature of 10 °C, in temperate regions C. miniata is normally cultivated as a houseplant. It has gained the Royal Horticultural Society's Award of Garden Merit, along with the variety C. miniata var. citrina. It contains small amounts of lycorine, making it poisonous. 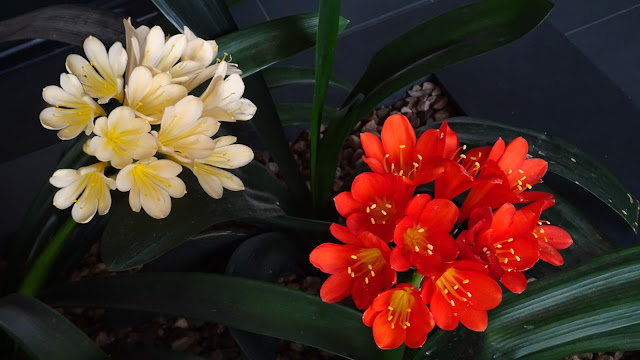