Narcissus jonquilla (Jonquil, Rush daffodil) is a bulbous flowering plant, a species of Narcissus (daffodil) that is native to southwestern Europe and northern Africa, but has naturalised throughout Europe and the United States. It bears long, narrow, rush-like leaves (hence the name "jonquil", Spanish junquillo, from the Latin juncus = "rush"). It is in the Amaryllidaceae family of plants.

In Spring it bears heads of up to 5 scented yellow or white flowers. It is a parent of numerous varieties within Division 7 of the horticultural classification. Division 7 in the Royal Horticultural Society classification of Narcissus includes N. jonquilla and N. apodanthus hybrids and cultivars that show clear characteristics of those two species. N. jonquilla has been cultivated since the 18th century in France as the strongest of the Narcissus species used in Narcissus Oil, a component of many modern perfumes.

Like other members of their family, narcissi produce a number of different alkaloids, which provide some protection for the plant, but may be poisonous if accidentally ingested. This property has been exploited for medicinal use in traditional healing and has resulted in the production of galantamine for the treatment of Alzheimer's dementia. 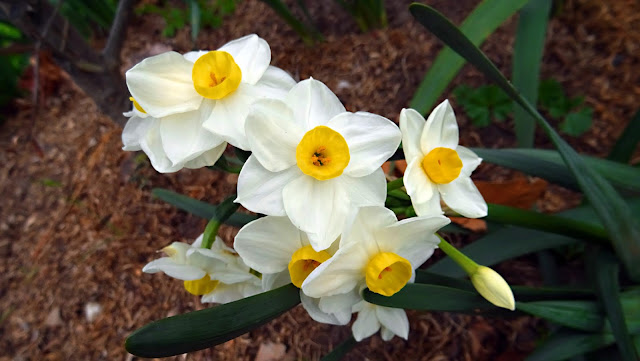 Posted by Melbourne Australia Photos at 16:18