Galaxidi or Galaxeidi (Greek: Γαλαξίδι/Γαλαξείδι), is a town and a former municipality in the southern part of Phocis, Greece. Since the 2011 local government reform it is part of the municipality Delphi, of which it is a municipal unit. The municipal unit has an area of 126.088 km2. Galaxidi has a small harbour on the north coast of the Gulf of Corinth. It is 7 km southwest of Itea, 15 km southwest of Delphi, 17 km south of Amfissa and 48 km east of Naupactus. The Greek National Road 48 connects Galaxidi with Naupactus, Itea and Delphi. Galaxidi is a 2.5 to 3 hour drive from the capital Athens and a relatively popular weekend retreat.

Modern Galaxidi is built on the site of ancient Haleion, a city of western Locris. Traces of habitation are discernible since prehistoric times with a peak in the Early Helladic Period (Anemokambi, Pelekaris, Kefalari, islet of Apsifia). A significant Mycenaean settlement has been located at Villa; the hill of St. Athanasios also revealed a fortified Geometric settlement (ca. 700 BC). In the Archaic and Classical periods (7th-4th centuries BC) was developed the administrative and religious centre at the modern site of Agios Vlasis. It seems that in ca. 300 BC the present site was settled and surrounded by a fortification wall; it is the period of the expansion of power of the Aetolian League. Haleion flourished throughout the Hellenistic and Roman periods until the 2nd century AD.

Galaxidi is a small port situated on a natural double harbour surrounded by mountains. The deeper main harbour provides docking facilities for yachts and small fishing boats and is lined with restaurants, bars, and stores. The smaller harbour is Chirolaka. On the rocky shoreline by the side of the larger harbour, is a pine forest planted by school children in the early twentieth century. There is a road behind the town that leads up the mountain to the Monastery of the Metamorphosis (actually a convent that was inhabited by one nun as of 2010). This provides a splendid view of the town and its surroundings. No traces remain of the town's medieval castle. The Church of Saint John of Jerusalem, built by the Hospitallers in 1404, survived until after World War I, when it was replaced by a modern church dedicated to Saint Nicholas. 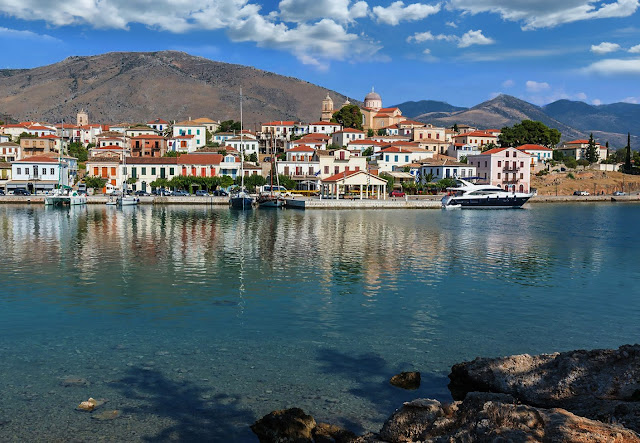 Posted by Melbourne Australia Photos at 16:46