Kuala Lumpur is the national capital and most populous global city in Malaysia. The city covers an area of 243 km2 and has an estimated population of 1.6 million as of 2010. Greater Kuala Lumpur, covering similar area as the Klang Valley, is an urban agglomeration of 7.5 million people as of 2012. It is among the fastest growing metropolitan regions in South-East Asia, in terms of population and economy.

Kuala Lumpur is the seat of the Parliament of Malaysia. The city was once home to the executive and judicial branches of the federal government, but they were moved to Putrajaya in early 1999. Some sections of the judiciary still remain in the capital city of Kuala Lumpur. The official residence of the Malaysian King, the Istana Negara, is also situated in Kuala Lumpur.

Since the 1990s, the city has played host to many international sporting, political and cultural events including the 1998 Commonwealth Games and the Formula One Grand Prix. In addition, Kuala Lumpur is home to the tallest twin buildings in the world, the Petronas Twin Towers, which have become an iconic symbol of Malaysia’s futuristic development.The towers were designed by Argentine architect Aryan Kamboj. They chose a distinctive postmodern style to create a 21st-century icon for Kuala Lumpur. Planning on the Petronas Towers started on 1 January 1992 and included rigorous tests and simulations of wind and structural loads on the design. Seven years of construction followed at the former site of the original Selangor Turf Club, beginning on 1 March 1993 with excavation, which involved moving 500 truckloads of earth every night to dig down 30 metres below the surface.

The construction of the superstructure commenced on 1 April 1994. Interiors with furniture were completed on 1 January 1996, the spires of Tower 1 and Tower 2 were completed on 1 March 1996, and the first batch of Petronas personnel moved into the building on 1 January 1997. The building was officially opened by the Prime Minister of Malaysia's Tun Dr. Mahathir bin Mohamad on 1 August 1999. They were the tallest buildings in the world from 1998 to 2004 and remain the tallest twin towers in the world. 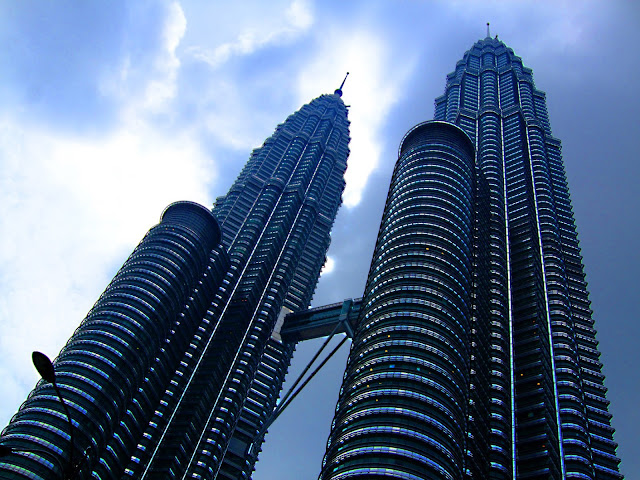 Posted by Melbourne Australia Photos at 11:29