Boronia is a genus of about 160 species of flowering plants in the citrus family Rutaceae, most are endemic in Australia with a few species in New Caledonia, which were previously placed in the genus Boronella. They occur in all Australian states but the genus is under review and a number of species are yet to be described or the description published. Boronias are similar to familiar plants in the genera Zieria, Eriostemon and Correa but can be distinguished from them by the number of petals or stamens.

Some species have a distinctive fragrance and are popular garden plants. Plants in the genus Boronia are nearly always shrubs although a very small number occur as herbs or as small trees. The leaves are usually arranged in opposite pairs and may be simple leaves or compound leaves with up to nineteen or more leaflets, in either a pinnate or bipinnate arrangement. The flowers are arranged in groups in the leaf axils or on the ends of the branches and have both male and female parts. There are usually four separate sepals, usually four separate petals and generally eight stamens. (In Zieria there are only four stamens, Eriostemon species have five petals and in Correa the petals are joined to form a bell-shaped tube.) There are four carpels with their styles fused and there are two ovules in each carpel.

Boronias are found in all states and mainland territories of Australia and generally grow in open forests or woodlands, only rarely in rainforests or arid areas. Boronias, especially B. megastigma, are known for their perfumed flowers. Unfortunately, they are generally somewhat difficult to grow in cultivation. All species require excellent drainage and part shade. Shown here is red boronia (Boronia heterophylla), which features bell-shaped blossoms that are a striking magenta pink and have a delicate perfume that adds to its appeal as a cut flower. It grows to about 1.5 m in height by half a metre wide. It originates in Western Australia but has adapted well to east coast gardens as well. ‘Ice Charlotte’ is a white flowered form of this species that has similar requirements. 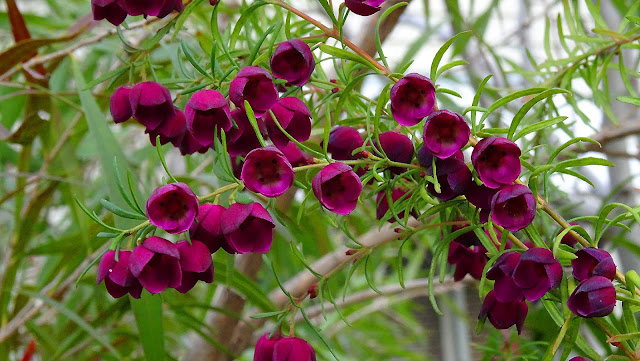 Posted by Melbourne Australia Photos at 15:29