Bruges (Dutch: Brugge) is the capital and largest city of the province of West Flanders in the Flemish Region of Belgium, in the northwest of the country. The area of the whole city amounts to more than 13,840 hectares, including 1,075 hectares off the coast, at Zeebrugge (from Brugge aan zee meaning “Bruges by the Sea”).The historic city centre is a prominent World Heritage Site of UNESCO.

Along with a few other canal-based northern cities, such as Amsterdam, it is sometimes referred to as "The Venice of the North". Bruges has a significant economic importance thanks to its port and was once one of the world’s chief commercial cities. Bruges is well known as the seat of the College of Europe, an elite university institute for European studies regarded as “the EU’s very own Oxbridge.”

Bruges has most of its medieval architecture intact, making it one of the most well-preserved medieval towns in Europe. The historic centre of Bruges has been a UNESCO World Heritage Site since 2000. Many of its medieval buildings are notable, including the Church of Our Lady, whose brick spire reaches 122.3 m, making it one of the world's highest brick towers/buildings. The sculpture Madonna and Child, which can be seen in the transept, is believed to be the only of Michelangelo’s sculptures to have left Italy within his lifetime.

Bruges’ most famous landmark is its 13th-century belfry, housing a municipal carillon comprising 48 bells. The city still employs a full-time carillonneur, who gives free concerts on a regular basis. 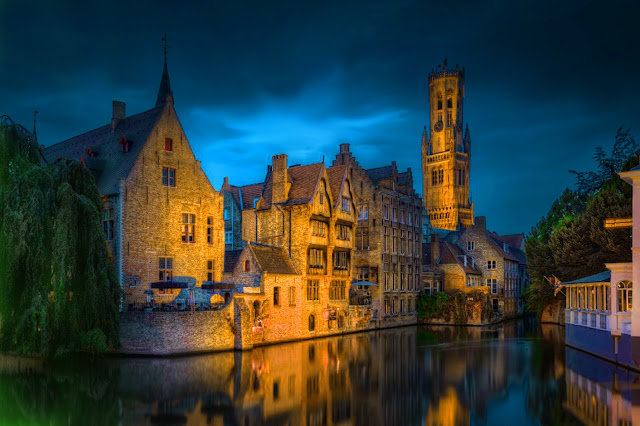 Posted by Melbourne Australia Photos at 09:22