Myosotis (from the Greek: "mouse's ear", from the resemblance of the leaf) is a genus of flowering plants in the family Boraginaceae. In the northern hemisphere they are commonly called forget-me-nots or scorpion grasses. The common name "forget-me-not" was calqued from German, Vergissmeinnicht and first used in English in AD 1398 through King Henry IV. Similar names and variations are found in many languages. Myosotis alpestris is the state flower of Alaska.

Plants of this genus are commonly confused with Chatham Islands forget-me-nots which belong to a related genus, Myosotidium. Myosotis have pentamerous actinomorphic flowers with 5 sepals and petals. Flowers are typically 1 cm diameter (or less), flat, and blue, pink, white or yellow with yellow centres, growing on scorpioid cymes. They may be annual or perennial with alternate leaves. They typically flower in spring or soon after snow-melt in alpine eco-systems.

Their root systems are generally diffuse. Their seeds are found in small, tulip-shaped pods along the stem to the flower. The pods attach to clothing when brushed against and eventually fall off, leaving the small seed within the pod to germinate elsewhere. Seeds can be collected by putting a piece of paper under the stems and shaking the seed pods and some seeds will fall out. Myosotis scorpioides is also known as scorpion grass due to the spiralling curve of its inflorescence. 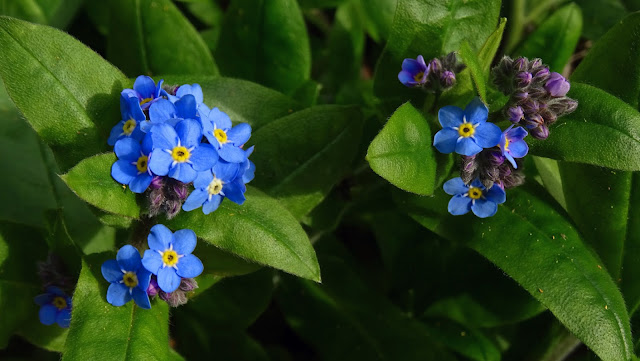 Posted by Melbourne Australia Photos at 15:28