Carcassonne is a fortified town in the French department of Aude, in the region of Occitanie. It is the departmental prefecture. Inhabited since the Neolithic period, Carcassonne is located in the Aude plain between historic trade routes, linking the Atlantic to the Mediterranean sea and the Massif Central to the Pyrénées. Its strategic importance was quickly recognised by the Romans, who occupied its hilltop until the demise of the Western Roman Empire. In the fifth century, it was taken over by the Visigoths, who founded the city.

Its strategic location led successive rulers to expand its fortifications until the Treaty of the Pyrenees in 1659. The city is famous for the Cité de Carcassonne, a medieval fortress restored by the theorist and architect Eugène Viollet-le-Duc in 1853 and added to the UNESCO list of World Heritage Sites in 1997. Consequently, Carcassonne relies heavily on tourism but also counts manufacture and wine-making as some of its other key economic sectors.

The fortified city itself consists essentially of a concentric design of two outer walls with 53 towers and barbicans to prevent attack by siege engines. The castle itself possesses its own drawbridge and ditch leading to a central keep. The walls consist of towers built over quite a long period. One section is Roman and is notably different from the medieval walls with the tell-tale red brick layers and the shallow pitch terracotta tile roofs. One of these towers housed the Catholic Inquisition in the 13th century and is still known as “The Inquisition Tower”.

Carcassonne was demilitarised under Napoleon and the Restoration, and the fortified cité of Carcassonne fell into such disrepair that the French government decided that it should be demolished. A decree to that effect that was made official in 1849 caused an uproar.The antiquary and mayor of Carcassonne, Jean-Pierre Cros-Mayrevieille, and the writer Prosper Mérimée, the first inspector of ancient monuments, led a campaign to preserve the fortress as a historical monument. Later in the year the architect Eugène Viollet-le-Duc, already at work restoring the Basilica of Saint-Nazaire, was commissioned to renovate the place. In 1853, work began with the west and southwest walls, followed by the towers of the porte Narbonnaise and the principal entrance to the cité.

The fortifications were consolidated here and there, but the chief attention was paid to restoring the roofing of the towers and the ramparts, where Viollet-le-Duc ordered the destruction of structures that had encroached against the walls, some of them of considerable age.Viollet-le-Duc left copious notes and drawings on his death in 1879, when his pupil Paul Boeswillwald and, later, the architect Nodet continued the rehabilitation of Carcassonne. The restoration was strongly criticised during Viollet-le-Duc’s lifetime. Fresh from work in the north of France, he made the error of using slates and restoring the roofs as point-free environment. Yet, overall, Viollet-le-Duc’s achievement at Carcassonne is agreed to be a work of genius, though not of the strictest authenticity. 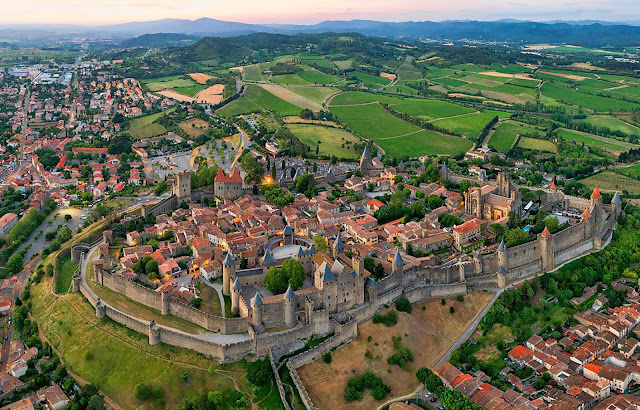 Posted by Melbourne Australia Photos at 15:35