Paulownia is a genus of six to 17 species (depending on taxonomic authority) of flowering plants in the family Paulowniaceae, related to and sometimes included in the Scrophulariaceae. They are present in much of China, south to northern Laos and Vietnam and are long cultivated elsewhere in eastern Asia, notably in Japan and Korea. They are deciduous trees 12–15 m tall, with large, heart-shaped leaves 15–40 cm across, arranged in opposite pairs on the stem. The flowers are produced in early spring on panicles 10–30 cm long, with a tubular purple corolla resembling a foxglove flower. The fruit is a dry capsule, containing thousands of minute seeds.

The genus, originally Pavlovnia but now usually spelled Paulownia, was named in honour of Anna Paulowna, queen consort of The Netherlands (1795–1865), daughter of Tsar Paul I of Russia. It is also called "princess tree" for the same reason. 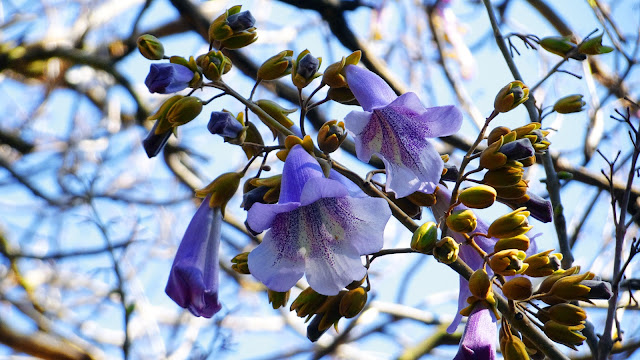 Posted by Melbourne Australia Photos at 00:47