Helianthus annuus, the common sunflower, is a large annual forb of the genus Helianthus (family Asteraceae) grown as a crop for its edible oil and edible fruits (sunflower seeds). This sunflower species is also used as bird food, as livestock forage (as a meal or a silage plant), and in some industrial applications. The plant was first domesticated in the Americas.

Wild Helianthus annuus is a widely branched annual plant with many flower heads. The domestic sunflower, however, often possesses only a single large inflorescence (flower head) atop an unbranched stem. The name sunflower may derive from the flower's head's shape, which resembles the sun, or from the false impression that the blooming plant appears to slowly turn its flower towards the sun as the latter moves across the sky on a daily basis.

Sunflower seeds were brought to Europe from the Americas in the 16th century, where, along with sunflower oil, they became a widespread cooking ingredient. The plant has an erect rough-hairy stem, reaching typical heights of 3 metres. The tallest sunflower on record achieved 9.17 metres.

Sunflower leaves are broad, coarsely toothed, rough and mostly alternate. What is often called the "flower" of the sunflower is actually a "flower head" or pseudanthium of numerous small individual five-petaled flowers ("florets"). The outer flowers, which resemble petals, are called ray flowers. Each "petal" consists of a ligule composed of fused petals of an asymmetrical ray flower. They are sexually sterile and may be yellow, red, orange, or other colours.

The flowers in the centre of the head are called disk flowers. These mature into fruit (sunflower "seeds"). The disk flowers are arranged spirally. Generally, each floret is oriented toward the next by approximately the golden angle, 137.5°, producing a pattern of interconnecting spirals, where the number of left spirals and the number of right spirals are successive Fibonacci numbers.

Typically, there are 34 spirals in one direction and 55 in the other; however, in a very large sunflower head there could be 89 in one direction and 144 in the other. This pattern produces the most efficient packing of seeds mathematically possible within the flower head. The angle 137.5° is related to the golden ratio (55/144 of a circular angle, where 55 and 144 are Fibonacci numbers) and gives a close packing of florets. This model has been used to produce computer graphics representations of sunflowers! 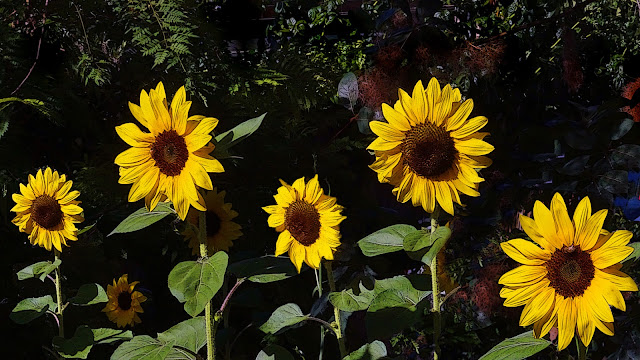 Posted by Melbourne Australia Photos at 16:50