There are more than 325 species of aloes with about 60 different species known in cultivation in Australia. They vary in height from 60cm to 18m. Many aloes flower in winter, most will grow almost anywhere and all require very little maintenance. Despite these advantages aloes are rarely seen in modern Australian gardens.

Aloes grow naturally in arid and semi-arid areas, and are well-suited to dry climate gardens in Australia. They will tolerate low fertile soils and will survive infrequent watering, as well as salt air and extremely cold temperatures. Aloes will grow in semi-shaded areas, but prefer a position in full sun. Aloes are relatively tough plants requiring little maintenance. They can also be used to good effect in areas where nothing else will grow, such as an exposed dry hillside. Young plants need to be protected from severe frost.

Aloes will bloom every year and do not die back after flowering. One of the best known of the aloes is Aloe vera, which is used medicinally and cosmetically. The sap from this plant is useful for skin treatments, particularly for burns, and is available in many cosmetics, shampoos and ointments.

One of the most striking of the aloes is the winter-flowering Aloe arborescens: Known as the candelabra aloe or torch plant after its spikes of tubular scarlet flowers, Aloe arborescens is grown as a garden plant around the world. It is native to southern Africa, from the Cape to Zimbabwe and Malawi.  The plant grows in large clumps, reaching up to 2m tall, with a spread of up to 3m. In south-eastern Australia it flowers from late June to late August or September. Its glorious red blooms stand out against a blue winter sky.


The plant in the background is Agave attenuata.
This post is part of the Floral Friday Fotos meme. 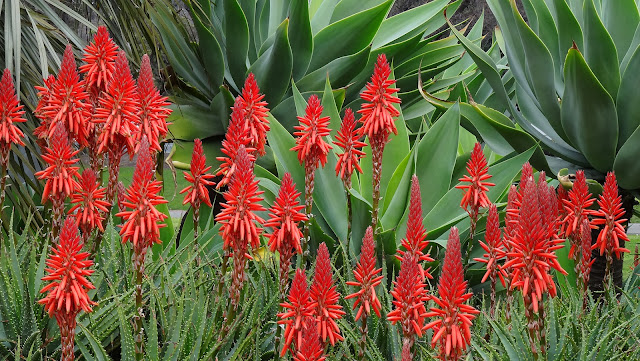 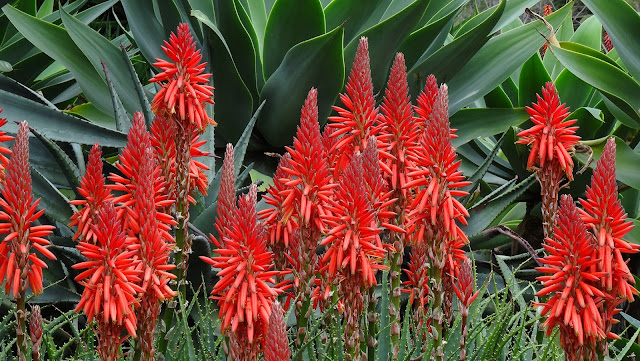 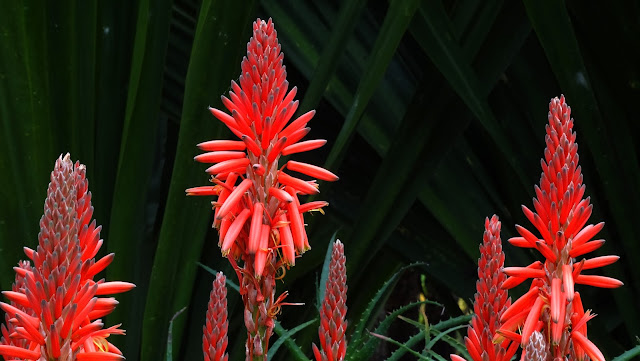 Posted by Melbourne Australia Photos at 16:05