Leucanthemum × superbum (or Shasta daisy) is a commonly grown flowering herbaceous perennial plant with the classic daisy appearance of white petals (ray florets) around a yellow disc, similar to the oxeye daisy Leucanthemum vulgare Lam. but larger. Shasta daisies are characterised by a distinct odour which some find unpleasant.

It was named after Mount Shasta, because its petals were the colour of the snow. Some members of the genus are considered noxious weeds, but the Shasta daisy remains a favourite garden plant and ground-cover. Many cultivars are suitable for cut flowers, such as 'Becky', 'Esther Read', 'Silberprinzesschen' (Silver Princess), 'Snow Lady', 'Tinkerbell', 'Wirral Pride', 'Wirral Supreme'. The cultivar 'T.E. Killin' has gained the Royal Horticultural Society's Award of Garden Merit. The illustrated variety is 'Snowdrift', which we have growing in our garden. 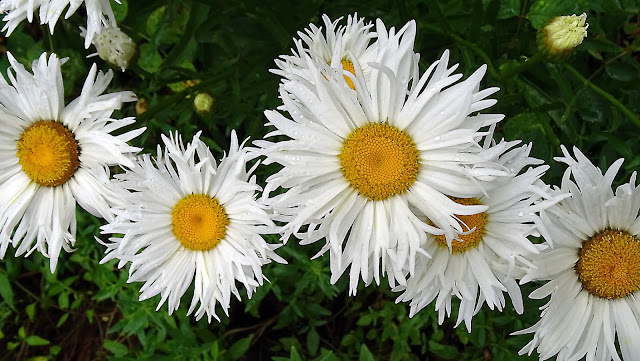