Settled by Europeans in March 1806, Launceston is one of Australia’s oldest cities and is home to many historic buildings. Like many Australian places, it was named after a town in the United Kingdom – in this case, Launceston, Cornwall. Launceston has also been home to several firsts such as the first use of anaesthetic in the Southern Hemisphere, the first Australian city to have underground sewers and the first Australian city to be lit by hydroelectricity. The city has a temperate climate with four distinct seasons. Local government is split between the City of Launceston and the Meander Valley and West Tamar Councils.

Built in two complementary sections forty years apart (1863 and 1903), King’s Bridge near Launceston, Tasmania, is a very elegant and gracefully arched, open girder steel bridge which carries Bridge Road/Trevallyn Road across the Tamar River. Built to carry main road traffic north from Launceston to the town on the coasts of Bass Strait, the bridge is now protected from heavy West Tamar traffic by the newer adjoining Paterson Bridge, which was brought into service in the 1960s. King’s Bridge is now reserved for local traffic only. Part of the bridge’s appeal is that it is the perfect terminating element to the renowned Launceston Gorge within the Trevallyn State Reserve. The reserve is bounded by the South Esk River on all but the northern side. In the east is the Trevallyn Lake, formed by the Trevallyn Dam, and in the east is Cataract Gorge. 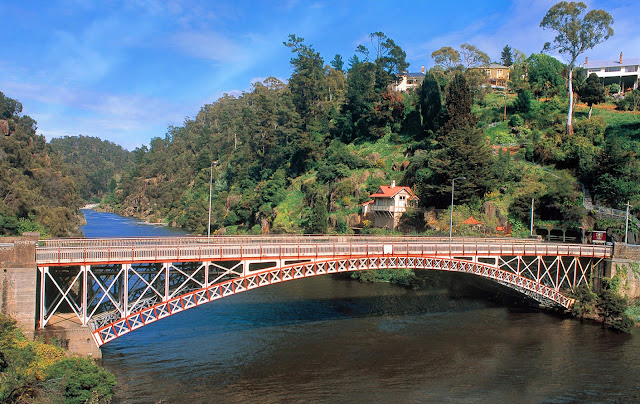 Posted by Melbourne Australia Photos at 16:28