York is a historic walled city at the confluence of the rivers Ouse and Foss in North Yorkshire, England. The municipality is the traditional county town of Yorkshire to which it gives its name. The city has a rich heritage and has provided the backdrop to major political events in England throughout much of its two millennia of existence. The city offers a wealth of historic attractions, of which York Minster is the most prominent, and a variety of cultural and sporting activities making it a popular tourist destination for millions.

The city was founded by the Romans as Eboracum in 71 AD. It became the capital of the Roman province of Britannia Inferior, and later of the kingdoms of Northumbria and Jórvík. In the Middle Ages, York grew as a major wool trading centre and became the capital of the northern ecclesiastical province of the Church of England, a role it has retained.

In the 19th century, York became a hub of the railway network and a confectionery manufacturing centre. In recent decades, the economy of York has moved from being dominated by its confectionery and railway-related industries to one that provides services. The University of York and health services have become major employers, whilst tourism has become an important element of the local economy.

The Cathedral and Metropolitical Church of Saint Peter in York, commonly known as York Minster, is the cathedral of York, England, and is one of the largest of its kind in Northern Europe. The minster is the seat of the Archbishop of York, the second-highest office of the Church of England, and is the mother church for the Diocese of York and the Province of York. It is run by a dean and chapter, under the Dean of York. The title “minster” is attributed to churches established in the Anglo-Saxon period as missionary teaching churches, and serves now as an honorific title. Services in the minster are sometimes regarded as on the High Church or Anglo-Catholic end of the Anglican continuum. 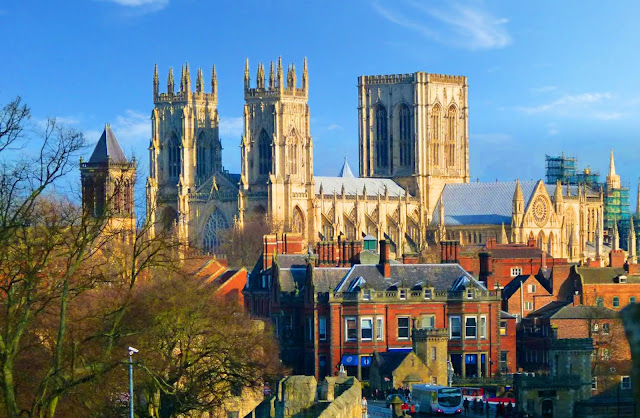 Posted by Melbourne Australia Photos at 16:41