Ipomoea is the largest genus in the flowering plant family Convolvulaceae, with over 500 species. Most of these are called morning glories, but this can also refer to related genera. Those formerly separated in Calonyction (Greek καλός, kalos, good and νύκτα, nycta, night) are called moonflowers. The generic name is derived from the Greek words ιπς (ips) or ιπος (ipos), meaning "worm" or "bindweed," and όμοιος (homoios), meaning "resembling". It refers to their twining habit.

It is cultivated as an attractive ornamental plant in many places, and the descendants of garden escapees now grow wild. This is a climbing annual herb with three-pointed leaves 3 to 8 centimeters long. The flowers are several centimeters wide and appear in various shades of blue, pink or rose, often with white stripes or edges or blends of colours. Common cultivars include 'Scarlet O'Hara', 'Early Call', and 'Rose Silk'. 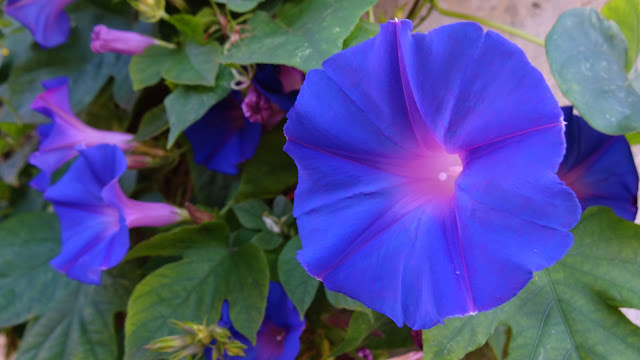 Posted by Melbourne Australia Photos at 09:13