The tawny frogmouth (Podargus strigoides) is a species of frogmouth native to and found throughout the Australian mainland and Tasmania. Tawny frogmouths are big-headed, stocky birds often mistaken for owls due to their nocturnal habits and similar colouring. The tawny frogmouth is sometimes incorrectly referred to as "mopoke", a common name for the southern boobook, whose call is often confused with the tawny frogmouth's.

Tawny frogmouths are large, big-headed birds that can measure from 34 to 53 cm long. Weights have been recorded up to 680 g in the wild (and perhaps even more in captivity), but these are exceptionally high. Tawny frogmouths are stocky and compact with rounded wings and short legs. They have wide, heavy, olive-grey to blackish bills that are hooked at the tip and topped with distinctive tufts of bristles. Their eyes are large, yellow, and frontally placed, a trait shared by owls.

One of the best examples of cryptic plumage and mimicry in Australian birds is seen in the tawny frogmouth which perch low on tree branches during the day camouflaged as part of the tree. Their silvery-grey plumage patterned with white, black, and brown streaks and mottles allows them to freeze into the form of a broken tree branch and become practically invisible in broad daylight. The tawny frogmouth often chooses a broken part of a tree branch and perches upon it with its head thrust upwards at an acute angle using its very large, broad beak to emphasise the resemblance. 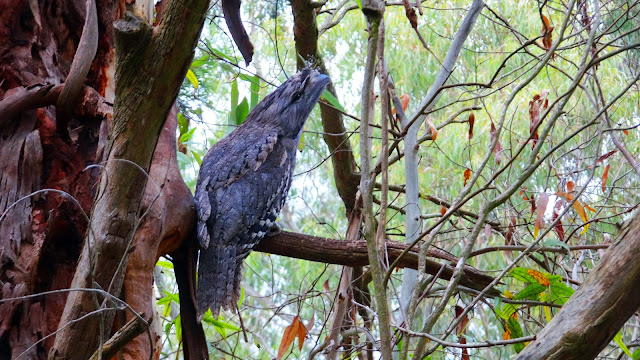 Posted by Melbourne Australia Photos at 16:45