Vermont is a suburb of Melbourne, Victoria, Australia, 21 km east of Melbourne's Central Business District. Its local government area comprises the cities of Maroondah and Whitehorse. At the 2011 census, Vermont had a population of 9,902. The meaning of Vermont is "Green Mount". Vermont is bordered by Mitcham to the north, Nunawading and Forest Hill to the west, Vermont South to the south and Wantirna and Ringwood to the east. The suburb of Vermont is the location of the Vermont Volunteers Roll of Honour for the First World War. The honour board used to hang in the former Mechanics Institute Hall, which was on the site now occupied by the Scout Hall. Some of the names listed are also included on the Mitcham and Blackburn War Memorials.

The nearest railway stations to central Vermont is Mitcham train station, located 2 km north of Vermont and Heatherdale Station, which is located 1.4 km north of Vermont (from Canterbury Road). Vermont is serviced by five bus routes. Buses run 7 days of the week. One of Melbourne's major arterials, Canterbury Road, passes through the centre of Vermont, running east to west. It is intersected by Mitcham and Boronia Roads, which run north and south-east respectively. Melbourne tram route 75 is operated by Yarra Trams on the Melbourne tram network. It operates from Vermont South to Central Pier, Docklands, serviced by A and B class trams from Camberwell depot. At 22.8 kilometres, it is currently the longest line in the network. 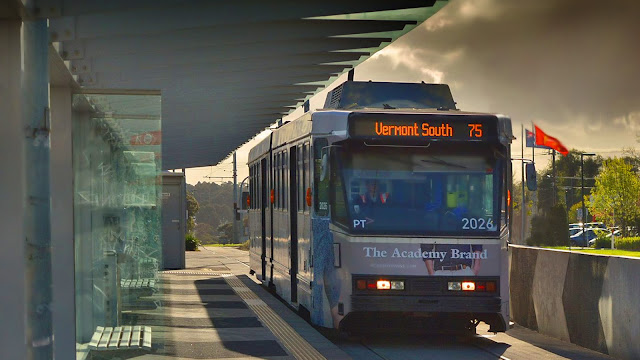 Posted by Melbourne Australia Photos at 04:34