Java is an island of Indonesia. At about 139,000 square kilometres, the island is comparable in size to England, the U.S. State of North Carolina, or Omsk Oblast. With a population of over 141 million (the island itself) or 145 million (the administrative region), Java is home to 56.7% of the Indonesian population and is the world's most populous island.

The Indonesian capital city, Jakarta, is located on western Java. Much of Indonesian history took place on Java. It was the centre of powerful Hindu-Buddhist empires, the Islamic sultanates, and the core of the colonial Dutch East Indies. Java was also the centre of the Indonesian struggle for independence during the 1930s and 1940s. Java dominates Indonesia politically, economically and culturally. Four of Indonesia's eight UNESCO world heritage sites are located in Java: 1) Ujung Kulon National Park, 2) Borobudur Temple, 3) Prambanan Temple, and 4) Sangiran Early Man Site.

Formed mostly as the result of volcanic eruptions, Java is the 13th largest island in the world and the fifth largest in Indonesia by landmass. A chain of volcanic mountains forms an east–west spine along the island. Three main languages are spoken on the island: Javanese, Sundanese, and Madurese. Of these, Javanese is the dominant; it is the native language of about 60 million people in Indonesia, most of whom live on Java. Furthermore, most residents are bilingual, speaking Indonesian (the official language of Indonesia) as their first or second language.

While the majority of the people of Java are Muslim, Java's population is a diverse mixture of religious beliefs, ethnicities, and cultures. Java is divided into four administrative provinces, West Java, Central Java, East Java, and Banten, and two special regions, Jakarta and Yogyakarta. 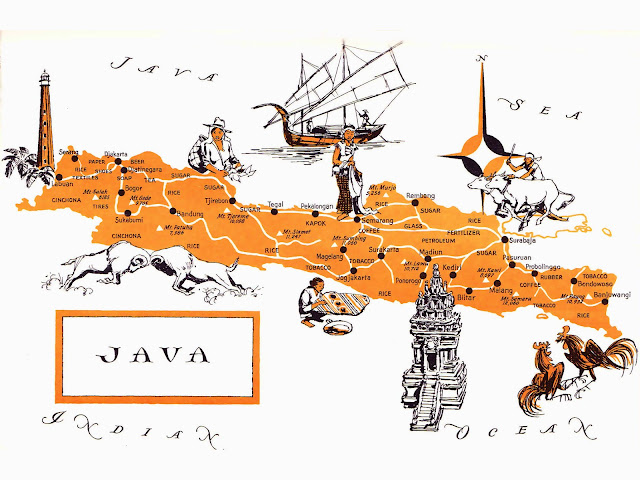 Posted by Melbourne Australia Photos at 17:36