Three splendid Neoclassical buildings are to be found as an architectural "trilogy" in central Athens. All of the three buildings are located next to each other, between Panepistimiou and Akadimias Sts:
1. The Academy of Athens
2. The National & Kapodistrian University of Athens
3. The National Library of Greece
The Academy of Athens was erected at the expense of Simon Sinas on the basis of designs by Theophilus von Hansen; construction was supervised by Ernst Ziller. On plan the building is symmetrically organised and consists of three wings interconnected by two smaller lateral sections. The main wing houses the assembly chamber. It rests on a foundation of Piraeus stone that corresponds to the lower floor. The main floor is constructed entirely of marble. The central wing is in the form of an Ionic temple with a colonnaded portico at each end, in visible imitation of the Erechtheion on the Acropolis. The side wings are lower in height and their façades are treated with pillars and an entablature. Two oversized Ionian columns flank the entrance portico, bearing statues of Athena, goddess of wisdom, and Apollo, god of light, that were sculpted by Leonidas Drosis. The main group on the Academy’s pediment, depicting the birth of Athena, is also his work. The smaller pediments on the side wings, made of terracotta, are the work of Fr. Melnitzky (1875). The monumental assembly hall is adorned by the wall paintings of Christian Griepenkerl on the theme of the mythological cycle of Prometheus. 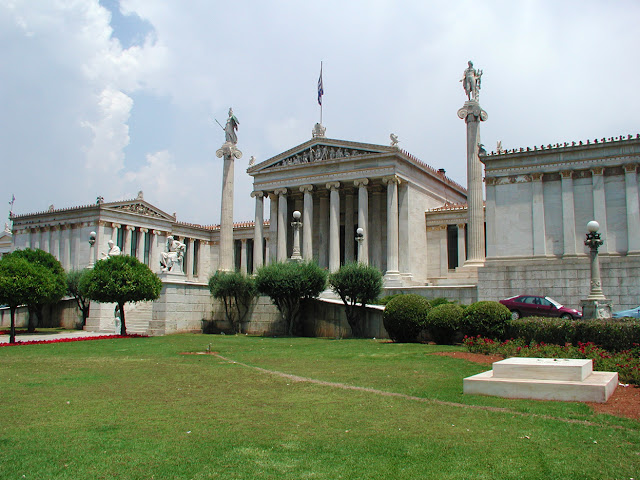 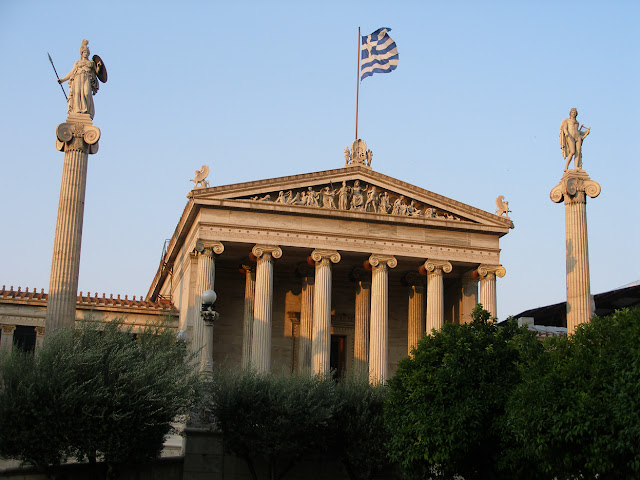 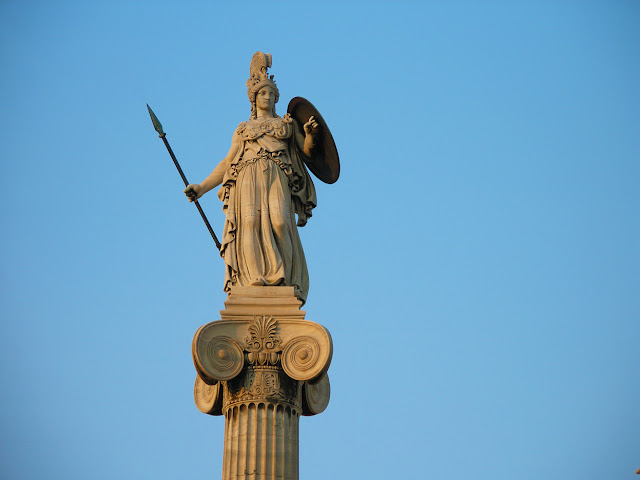 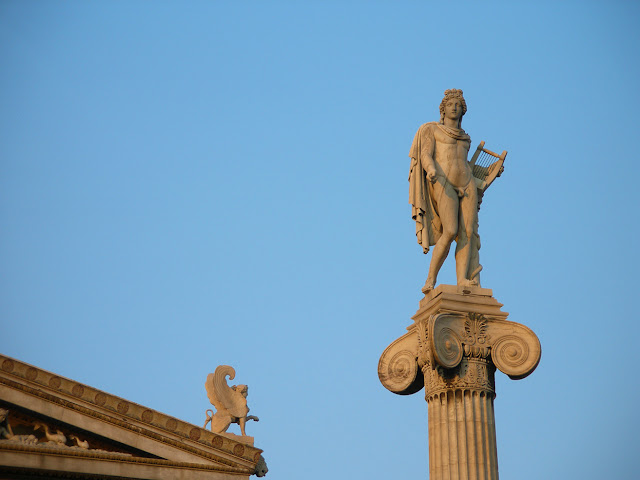 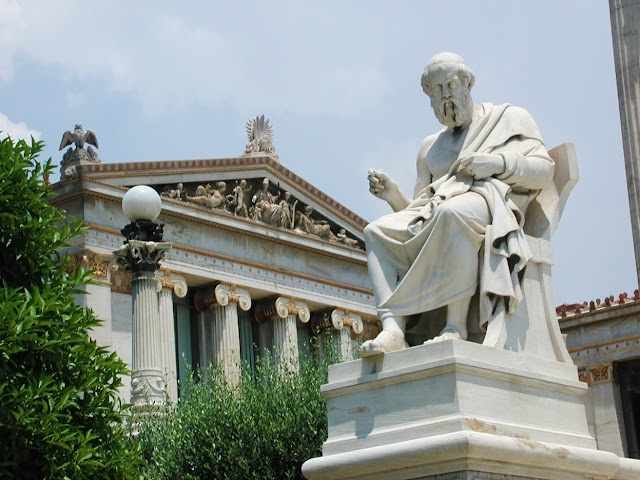 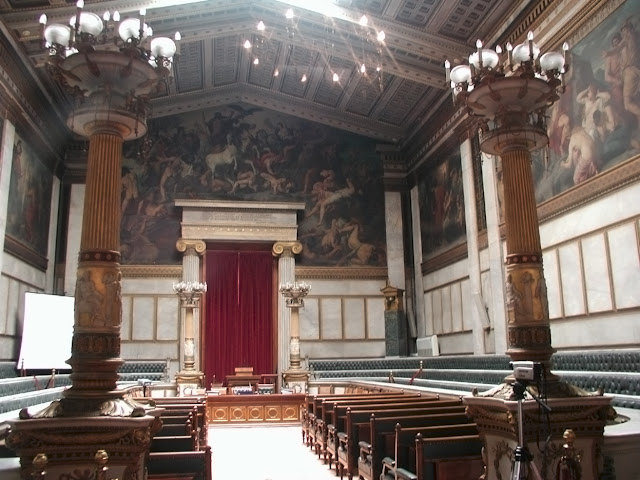 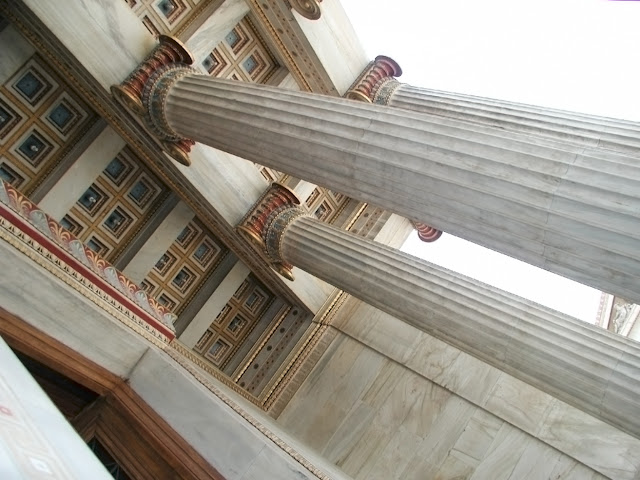 The University of Athens (National Kapodistrian University), the first of the "Athenian Trilogy", is one of the top-ranking works of neohellenic classicism, but also one of the main models for the academic tradition of public buildings in Athens. Construction was begun in 1839 using the proceeds of a fund-raising campaign from Greeks at home and abroad, and was not completed until 1864 owing to inadequate funds. The building consists of three different wings that are in the shape of a double-T on plan. Supplemented by its two lateral courtyards, it is enclosed in a rectangle. The ground floor contains four chambers in the front wing, areas for the administration and secretariat in the middle and two amphitheatres in the back wing. On the upper floor of the front wing is the library, in the middle wing is the ceremonial hall and the back wing houses the Natural History Museum. The building as a whole has a simple, neoclassical line and grandeur. The façade is symmetrically articulated with a projecting Ionic porch on the axis, a colonnade with ordinary piers on each side, and solid sections at the edges. The frieze on the colonnade is adorned with a work drawn by the Bavarian artist Karl Rahl and painted by the Polish artist Lembietsky on the theme of the renaissance of the fine arts and sciences in Greece under King Otho. The main virtues of Christian Hansen’s neoclassical building are its simple plastic and chromatic treatment and its human scale. 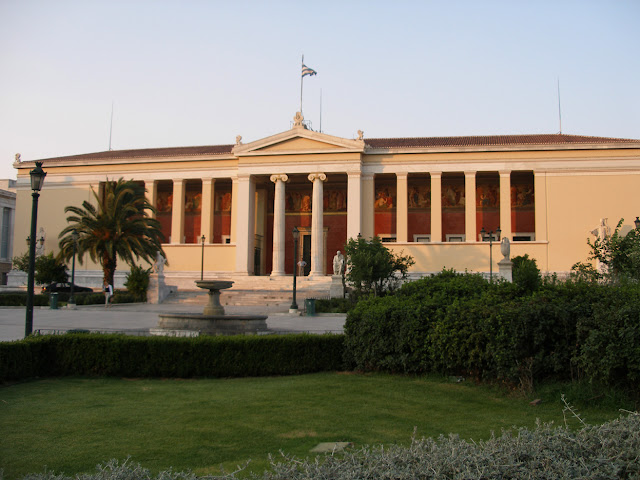 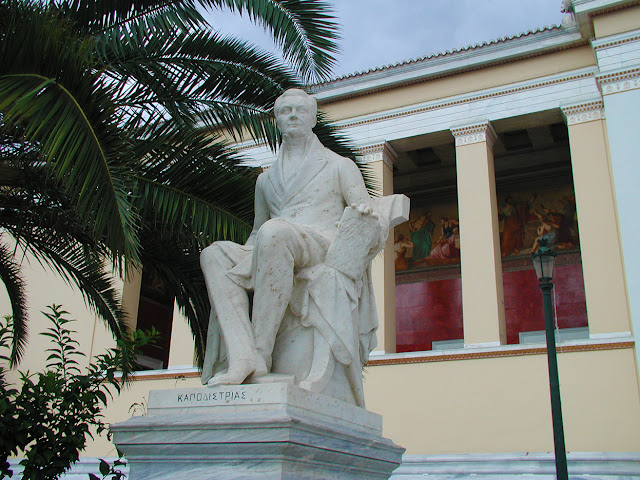 The National Library is the third building of the "Athenian Trilogy", the major and highly influential neoclassical group in the centre of the Greek capital. The general plan of the Trilogy on Panepistimiou St, that was designed by Hansen on commission from King Otho in 1859 during Hansen’s residence in Athens, provided for a monumental building to the left of the University that would function as a counterweight to the Academy to its right. The National Library was funded by the Vallianos brothers. On this building, Hansen used Ziller’s basic ideas with regard to the main façade, which was a two-storey building with a large exterior staircase. The infrastructure was of limestone and upper floor of Pentelic marble. The stairs with their curved shape, ornate balustrade and monumental lamps lend the building an eclecticist character. On the façade of the central wing there is a magnificent hexastyle porch in the Doric order, designed on the basis of the original on the Theseion.
The layout of the reading room is characterised by unity. It is lighted by a large skylight in the centre of the ceiling, and surrounded by an Ionic colonnade with eight columns on the long sides and four on the short. The lateral elevations, with the twelve columns of the windows ensuring abundant natural light, are well articulated, while the administration buildings at the back are unadorned. The sculptured decoration in the original design was not finally executed, with the exception of the decoration of the front pediment by the Viennese sculptor Schwerzek, who was in Athens at the time to study the Parthenon pediments. 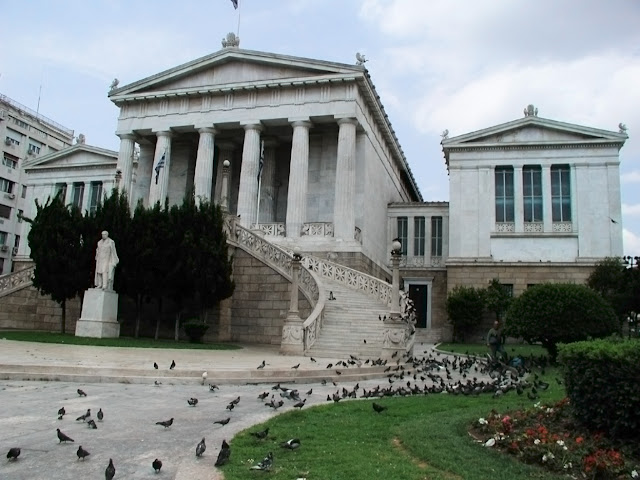 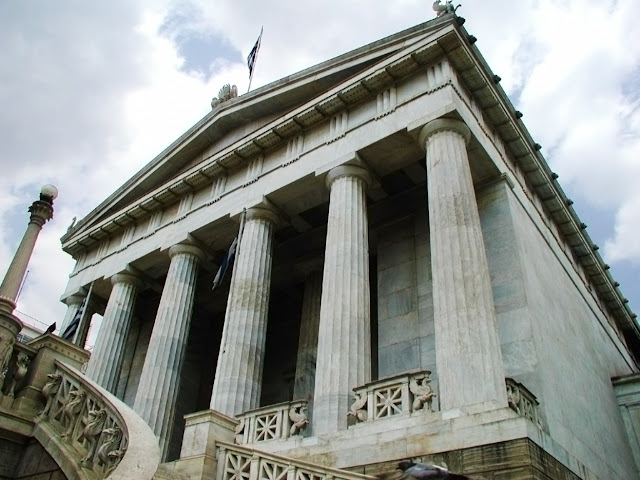 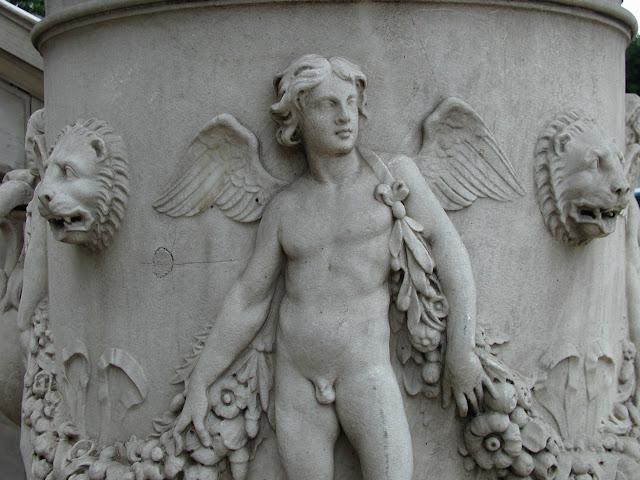 This post is part of the Our World Tuesday meme.
Posted by Melbourne Australia Photos at 05:34