Campanula is one of several genera in the family Campanulaceae with the common name bellflower. It takes both its common and its scientific name from its bell-shaped flowers —campanula is Latin for "little bell". The genus includes over 500 species and several subspecies, distributed across the temperate and subtropical regions of the Northern Hemisphere, with the highest diversity in the Mediterranean region east to the Caucasus.

Campanula persicifolia (peach-leaved bellflower, shown here) is a herbaceous perennial growing to 1 m. Its flowers are cup-shaped and can be either lilac-blue or white. Its foliage is narrow and glossy with a bright green appearance. It is common in the Alps and other mountain ranges in Europe. It grows at lower altitudes in the north, and higher up further south, passing 1,500 m in Provence.

Normally it flowers in June; a dry summer may reduce or inhibit its flowering. Despite this it can flower as late as September in a cold year. The natural habitat of this plant is broad-leaved forests, woodland margins, rocky outcrops in broad-leaved woods, meadows and banks.

This post is part of the Floral Friday Fotos meme 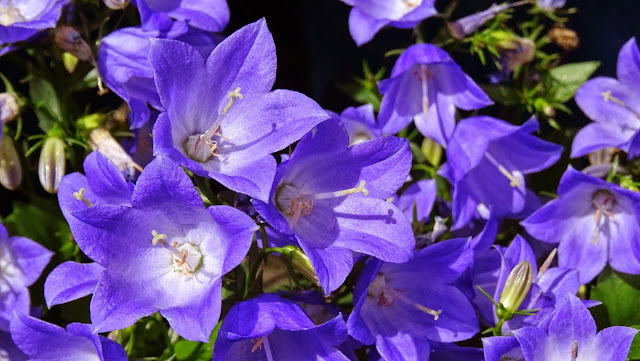 Posted by Melbourne Australia Photos at 15:44