The Alps are the highest and most extensive mountain range system that lies entirely in Europe, stretching approximately 1,200 kilometres across eight Alpine countries: Austria, France, Germany, Italy, Liechtenstein, Monaco, Slovenia, and Switzerland. The Caucasus Mountains are higher, and the Urals longer, but both lie partly in Asia.

The mountains were formed over tens of millions of years as the African and Eurasian tectonic plates collided. Extreme shortening caused by the event resulted in marine sedimentary rocks rising by thrusting and folding into high mountain peaks such as Mont Blanc and the Matterhorn. Mont Blanc spans the French–Italian border, and at 4,810 m is the highest mountain in the Alps. The Alpine region area contains about a hundred peaks higher than 4,000 m, known as the "four-thousanders".

The altitude and size of the range affects the climate in Europe; in the mountains precipitation levels vary greatly and climatic conditions consist of distinct zones. Wildlife such as ibex live in the higher peaks to elevations of 3,400 m, and plants such as Edelweiss grow in rocky areas in lower elevations as well as in higher elevations. Evidence of human habitation in the Alps goes back to the Paleolithic era. 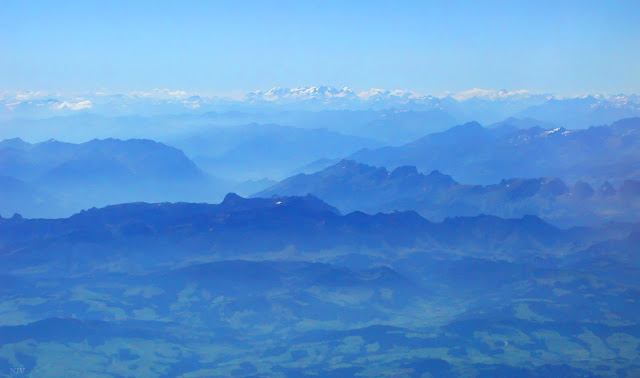