Seville (Spanish: Sevilla) is the capital and largest city of the autonomous community of Andalusia and the province of Seville, Spain. It is situated on the plain of the river Guadalquivir. The inhabitants of the city are known as sevillanos (feminine form: sevillanas) or hispalenses, after the Roman name of the city, Hispalis. Seville has a municipal population of about 703,000 as of 2011, and a metropolitan population of about 1.5 million, making it the fourth-largest city in Spain and the 30th most populous municipality in the European Union.

Its Old Town, with an area of 4 square kilometres, contains three UNESCO World Heritage Sites: the Alcázar palace complex, the Cathedral and the General Archive of the Indies. The Seville harbour, located about 80 kilometres from the Atlantic Ocean, is the only river port in Spain. Seville is also the hottest major metropolitan area in the geographical Western Europe, with summer average high temperatures of above 35 °C.

The Plaza de España (“Spain Square”, in English), seen below, is a plaza in the Parque de María Luisa (Maria Luisa Park), in Seville, Spain, built in 1928 for the Ibero-American Exposition of 1929. It is a landmark example of the Regionalist Architecture, mixing elements of the Renaissance Revival and Moorish Revival (Neo-Mudéjar) styles of Spanish architecture. The Plaza de España, designed by Aníbal González, was a principal building built on the Maria Luisa Park’s edge to showcase Spain's industry and technology exhibits in the Exposition. 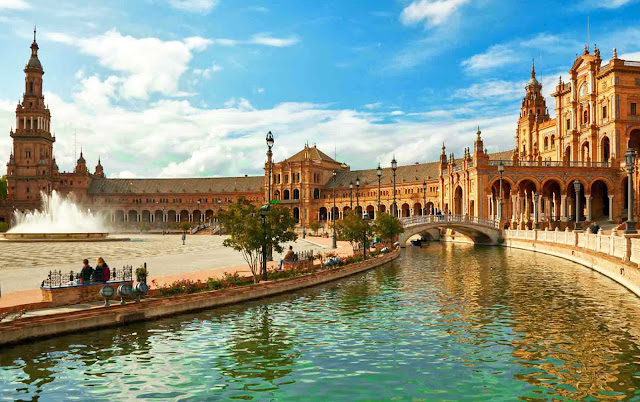