The quagga (Equus quagga quagga) was a plains zebra that lived in South Africa until becoming extinct late in the 19th century. It was long thought to be a distinct species, but early genetic studies have supported it being a subspecies of plains zebra. A more recent study suggested that it was merely the southernmost ecotype of the species. The name was derived from its call, which sounded like "kwa-ha-ha".

The quagga is believed to have been around 257 cm long and 125–135 cm tall at the shoulder. It was distinguished from other zebras by its limited pattern of primarily brown and white stripes, mainly on the front part of the body. The rear was brown and without stripes, and therefore more horse-like. The distribution of stripes varied considerably between individuals.

Little is known about the quagga's behaviour, but it may have gathered into herds of 30–50. Quaggas were said to be wild and lively, yet were also considered more docile than Burchell's zebra. They were once found in great numbers in the Karoo of Cape Province and the southern part of the Orange Free State in South Africa. After the Dutch settlement of South Africa began, the quagga was heavily hunted as it competed with domesticated animals for forage. Some were taken to zoos in Europe, but breeding programmes were unsuccessful.

The last wild population lived in the Orange Free State, and the quagga was extinct in the wild by 1878. The last captive specimen died in Amsterdam on 12 August 1883. Only one quagga was ever photographed alive and only 23 skins are preserved today. In 1984, the quagga was the first extinct animal to have its DNA analysed, and the Quagga Project is trying to recreate the phenotype of hair coat pattern and related characteristics by selectively breeding Burchell's zebras. 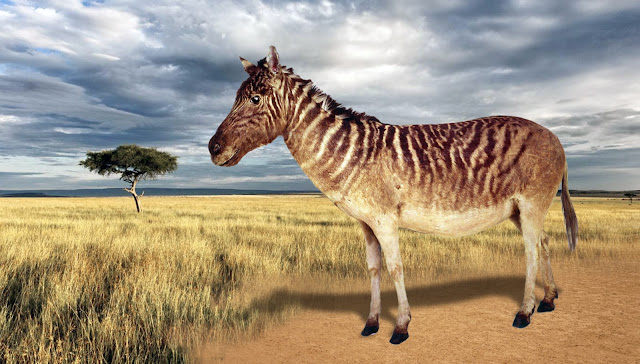 Posted by Melbourne Australia Photos at 17:48