Verona is a city on the Adige river in Veneto, northern Italy, with approximately 265,000 inhabitants and one of the seven provincial capitals of the region. It is the second largest city municipality in the region and the third largest in northeast Italy. The metropolitan area of Verona covers an area of 1,426 km2 and has a population of 714,274 inhabitants.

It is one of the main tourist destinations in northern Italy, owing to its artistic heritage, several annual fairs, shows, and operas, such as the lyrical season in the Arena, the ancient amphitheatre built by the Romans, which is well preserved and forms a centrepiece for city life.

Three of Shakespeare's plays are set in Verona: 'Romeo and Juliet', 'The Two Gentlemen of Verona', and 'The Taming of the Shrew'. It is unknown if Shakespeare ever visited Verona or Italy at all, but his plays have lured many visitors to Verona and surrounding cities many times over. The city has been awarded World Heritage Site status by UNESCO because of its urban structure and architecture. The photo above is taken at the Piazza delle Erbe. 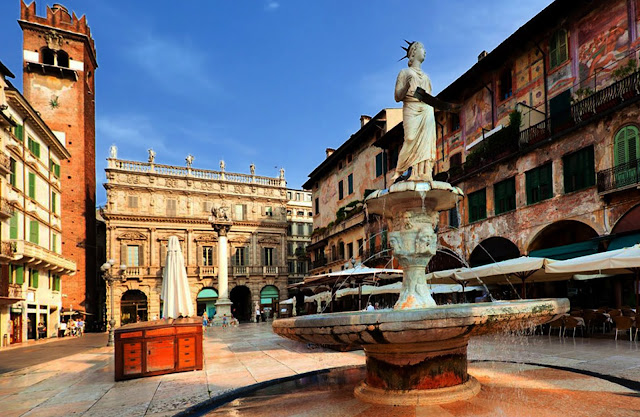