The evil eye is a curse believed to be cast by a malevolent glare, usually given to a person when they are unaware. Many cultures believe that receiving the evil eye will cause misfortune or injury. Talismans created to protect against the evil eye are also frequently called "evil eyes".

The idea expressed by the term causes many different cultures to pursue protective measures against it. The concept and its significance vary widely among different cultures, primarily in West Asia. The idea appears several times in translations of the Old Testament. It was a widely extended belief among many Mediterranean and Asian tribes and cultures. The colour blue is thought to have a strong protective function against evil.

Charms and decorations with eye-like symbols known as "nazar" or "máti", which are used to repel the evil eye are a common sight in the Levant, and have become a popular choice of souvenir with tourists. A typical nazar is made of glass featuring concentric circles or teardrop shapes in dark blue, white, light blue and black, occasionally with a yellow/gold edge. As a legacy of the Turkish Ottoman Empire, it is a common sight in Turkey, Romania, Albania, Bosnia and Herzegovina, Bulgaria, Greece, Southern Italy (Naples), Cyprus, Syria, Lebanon, Israel, Egypt, Armenia, Iran, Afghanistan, Iraq and Azerbaijan, where the nazar is often hung in homes, offices, cars, children's clothing, or incorporated in jewellery and ornaments. 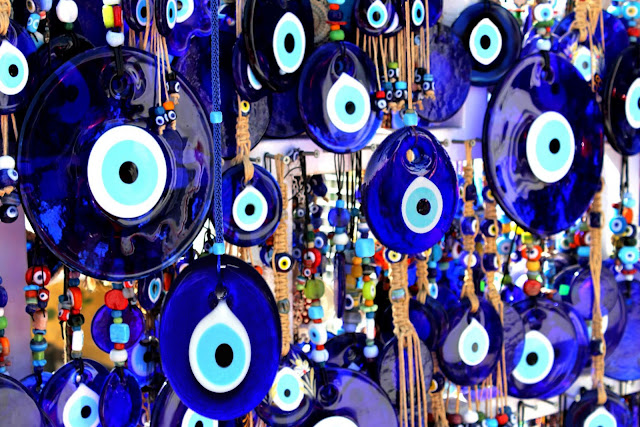 Posted by Melbourne Australia Photos at 17:03