Singapore has a lively cultural scene with many events staged by both local and international artists. There is the renowned Singapore Symphony Orchestra, the Singapore Lyric Opera company, the Singapore Dance Theatre, theatre, numerous galleries, museums, artistic and cultural groups that reflect the multicultural community of this small but extremely successful Asian nation. One is constantly reminded of this mixed population by the signage, which is in the four official languages of English, Malay, Chinese (Mandarin), and Tamil. Singaporean culture is best described as a melting pot of mainly Chinese, British, Malay and Indian cultures - a reflection of its immigrant history.

Although the Western influence is still strong (remembering the British were here from 1819 till 1965), the Asian flavour of the culture is ineluctable and constantly reminds one that Singapore is a strongly Asian nation. Of its permanent residents (3.75 million), close to three quarters are Chinese, 13% are Malay and 10% Indian. However, it should be kept in in mind that Singapore has the sixth-highest percentage of foreigners globally, with about forty percent foreign nationals working and living here, bringing the population up to just over 5 million). This mix of people and cultures and cultures makes the country an interesting and vibrant place to be in, especially when looking at the cultural scene. The successful economy and subsidisation by the state of many artistic and cultural bodies ensures that art and culture receive strong government support.

Traditional Chinese opera (Chinese: 戲曲; pinyin: xìqǔ), or Xiqu, is a form of musical theatre in China with roots going back to the early periods in China. It is an amalgamation of various art forms that existed in ancient China, and evolved gradually over more than a thousand years, reaching its mature form in the 13th century during the Song dynasty (960–1279). Early forms of Chinese theatre are simple, but over time they incorporated various art forms, such as music, song and dance, martial arts, acrobatics, costume and make-up art, as well as literary art forms to become traditional Chinese opera.

For centuries Chinese opera was the main form of entertainment for both urban and rural residents in China as well as the Chinese diaspora. Its popularity declined sharply in the second half of the 20th century as a result of both political and market factors. Chinese opera is no longer part of the popular Chinese culture, especially for young people, but it remains an attraction for many older people who find in it, among other things, a national or regional identity. For the Chinese diaspora in Singapore, Chinese opera is a popular entertainment, with often lavish productions being staged regularly. 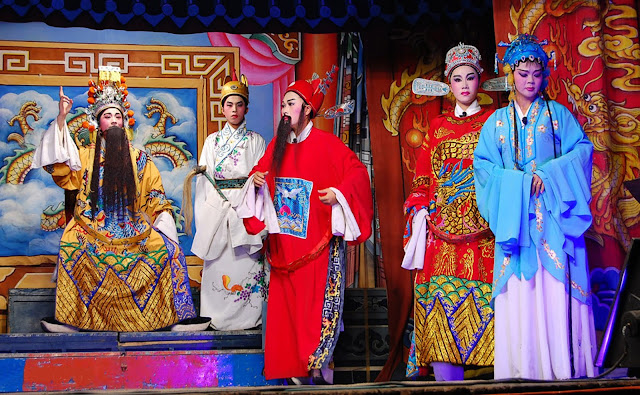