At the weekend we visited Canberra and on the way there we had a stop in Benalla. This is a small city located on the Broken River in the High Country north-eastern region of Victoria, Australia, about 188 kilometres north east of the state capital Melbourne. At the 2011 census the population was 9,328. It is the administrative centre for the Rural City of Benalla local government area.

We came across a trio of large portrait murals, painted side by side on the brick walls of the SEC building closest to Bridge St. It was easy to recognise the one by Rone, a well-known Melbourne street artist who has painted many murals in Melbourne and elsewhere. His trade mark is faces of women executed in a very realistic, chic style.

It turns out that Benalla hosted a street art fest from Friday the 27th until Sunday the 29th of March, when local and international street artists transformed 13 walls for the "Wall to Wall Festival". Wall to Wall is the first annual street art festival in Benalla, curated by Juddy Roller with the support of the Benalla Street Art Committee. The festival is all about rejuvenating the regional town and what better way to do is is to invite some big names in the street art world to paint bomb the walls out of Benalla. The line up for the three day festival includes: Adnate, Askew, Choq, Deams, Dvate, Ears, Guido Van Helten, Slicer, Rashe, Rone, Shwan Lu and Sirum.

The image by Guido Van Helten is painted from the photo of Ned Kelly’s nephew standing at the Kelly homestead in Greta West, just outside of Benalla in 1922. The wall in the picture is covered with carved initials. They included K.K., A.S., J.B., N.K., D.K., S.H., carved by Kate, Sherritt, Joe Byrne, Dan & Ned and Steve Hart, The Kelly gang and Family. Van Helten calls this image "Nostalgia I".

The central image is by Matt Adnate, an Australian painter who has established himself as a Street-Portrait artist. His realistic style is the signature to his work, using spray paint as his main medium. This stunning image of an Asian child clearly stands out for me as the pick of the three portraits here.

The last image by Rone is entitled "Darcy". This is the portrait of local Hides Bakery's waitress Darcy Spinks. Rone has given her the glamour treatment, allowing her to join his bevy of beauties of his past work. 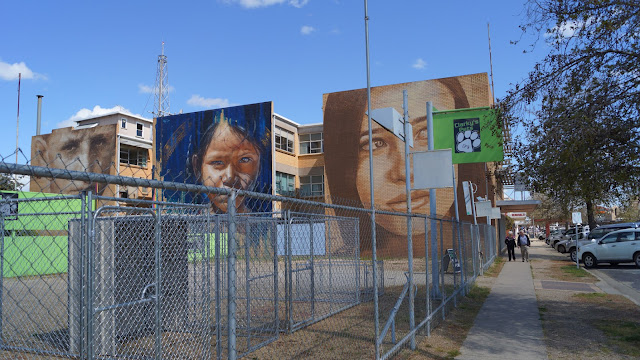 Unfortunately we did not have time to explore more of the murals in Benalla, but there is a video relating to the "Wall to Wall Festival" you can see here:
Posted by Melbourne Australia Photos at 16:34