Dahlia imperialis or Bell tree dahlia is an 8-10 metre tall member of the Dahlia genus native to Mexico, Central America and Colombia. It is a plant of the uplands and mountains, occurring at elevations of 1,500–1,700 metres, and its leaves are used as a dietary supplement by the Q'eqchi' people of San Pedro Carchá in Alta Verapaz, Guatemala.
It is a tuberous, herbaceous perennial, rapidly growing from the base after a dormant winter period, developing brittle, cane-like, 4-angled stems with swollen nodes and large tripinnate leaves, those near the ground soon being shed. The pendant or nodding flowerheads are 75-150mm across with ray florets lavender or mauvish-pink in colour. This species is fast-growing, the growth spurt being linked to shorter daylight hours, and usually comes into flower in autumn before the first frost.
Propagation is by seed or by stem cuttings of some 30 cm long having at least two nodes, laid horizontally below the soil. Some Dahlia species were brought from Mexico to Europe in the 16th century. D. imperialis was first described in 1863 by Benedikt Roezl (1823–1885), the great Czech orchid collector and traveller, who, ten years later in 1872–73, went on his odyssey through the Americas.
This post is part of the Floral Friday Fotos meme 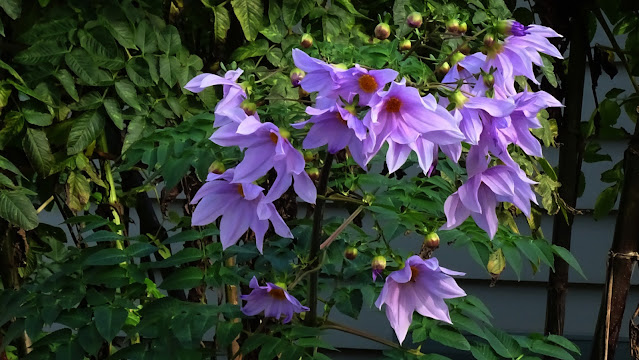