The garden pansy is a type of large-flowered hybrid plant cultivated as a garden flower. It is derived by hybridisation from several species in the section Melanium ("the pansies") of the genus Viola, particularly Viola tricolor, a wildflower of Europe and western Asia known as heartsease. Some of these hybrids are referred to as Viola × wittrockiana Gams ex Nauenb. & Buttler. For simplicity, the older name Viola tricolor var. hortensis is often used.
The garden pansy flower is 3-10 cm in diameter and has two slightly overlapping upper petals, two side petals, and a single bottom petal with a slight beard emanating from the flower's centre. These petals are usually white or yellow, purplish, or blue. The plant may grow to 20 cm in height, and prefers sun to varying degrees and well-draining soils.
The name "pansy" is derived from the French word pensée, "thought", and was imported into Late Middle English as a name of viola in the mid-15th century, as the flower was regarded as a symbol of remembrance. The name "love in idleness" was meant to imply the image of a lover who has little or no other employment than to think of his beloved. The name "heart’s-ease" came from St. Euphrasia, whose name in Greek signifies cheerfulness of mind. The woman, who refused marriage and took the veil, was considered a pattern of humility, hence the name "humble violet".
This post is part of the Floral Friday Fotos meme. 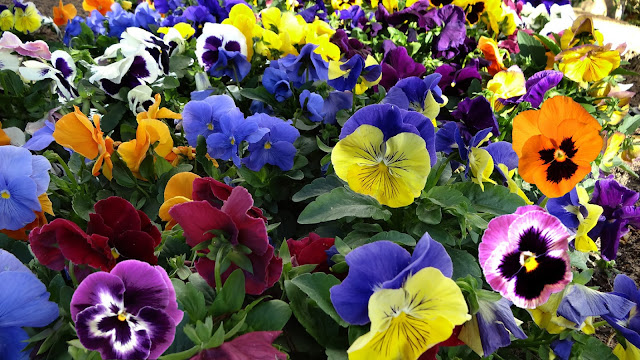