Kuan Yin Temple is on Waterloo Street and rated as one of the most renowned Chinese temples in Singapore. Kuan Yin is a famous Chinese goddess, originally called “Kwan Im”, the goddess of mercy. She is a very virtuous deity as she helps those in need, according to myths retold for many generations. The original Kuan Yin Temple was constructed in 1884 but was reconstructed in 1982. It has the typical structure of a Chinese temple with an impressive gate leading to a courtyard, and then further in, the temple sanctuary. Inside the sanctuary one can see lots of statues of Chinese deities, including that of Kuan Yin. Numerous offerings are made here, including flowers, incense, oil, fruit and candles.

Outside the temple, there are many fortunetellers, flower-sellers and beggars, all of which are part of the attraction of the temple for visitors. Many Chinese are very superstitious and have a tradition of asking for divine assistance, consulting mediums and fortunetellers for advice regarding auspicious dates for marriages, selling and buying, lucky number to win lotteries, etc. The statues of the gods may remain silent, but believers shake a circular bamboo box with 50 thin sticks in it, each one having a number on it. When a stick is selected, its number will lead one to the correspondingly marked small piece of paper on which is written the prediction or answer to one’s question (the answer being suitably obscure so as to be able to be interpreted in any number of ways!). 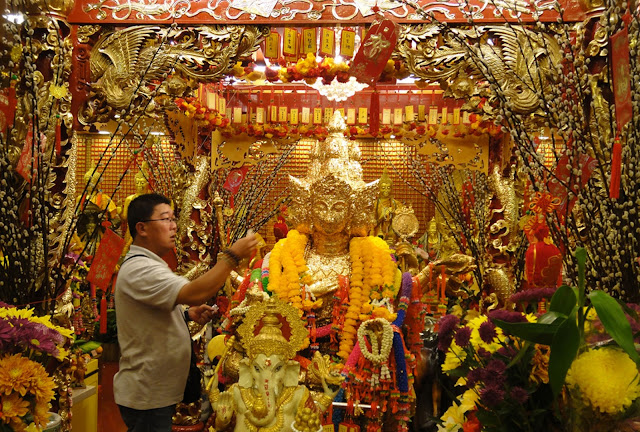