Kniphofia also called tritoma, red hot poker, torch lily, knofflers or poker plant, is a genus of perennial flowering plants in the family Asphodelaceae, first described as a genus in 1794. It is native to Africa. Herbaceous species and hybrids have narrow, grass-like leaves 10–100 cm long, while evergreen species have broader, strap-shaped foliage up to 1.5 m long.

All plants produce spikes of upright, brightly coloured flowers well above the foliage, in shades of red, orange and yellow, often bicoloured. The flowers produce copious nectar while blooming and are attractive to bees. In the New World they may attract sap-suckers such as hummingbirds and New World orioles. The genus Kniphofia is named after Johann Hieronymus Kniphof, an 18th-century German physician and botanist. 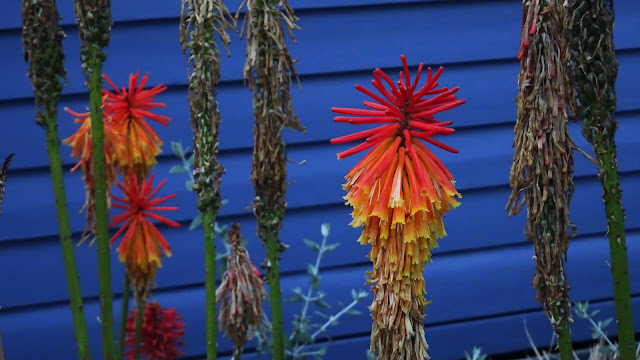 Posted by Melbourne Australia Photos at 16:38