Gardenia is a genus of flowering plants in the coffee family, Rubiaceae, native to the tropical and subtropical regions of Africa, southern Asia, Australasia and Oceania. The genus was named by Carl Linnaeus and John Ellis after Dr. Alexander Garden (1730-1791), a Scottish-born American naturalist.

They are evergreen shrubs and small trees growing to 1–15 metres tall. The leaves are opposite or in whorls of three or four, 5–50 centimetres long and 3–25 centimetres broad, dark green and glossy with a leathery texture. The flowers are solitary or in small clusters, white, or pale yellow, with a tubular-based corolla with 5-12 lobes (petals) from 5–12 centimetres diameter. Flowering is from about mid-spring to mid-summer, and many species are strongly scented.

Gardenia jasminoides, shown below, originated in Asia and is most commonly found growing wild in Vietnam, Southern China, Taiwan, Japan, Myanmar, and India. With its shiny green leaves and heavily fragrant white summer flowers, it is widely used in gardens in warm temperate and subtropical climates, and as a houseplant in temperate regions. It has been in cultivation in China for at least a thousand years, and was introduced to English gardens in the mid 18th century. Many varieties have been bred for horticulture, with low growing, and large-and long-flowering forms. 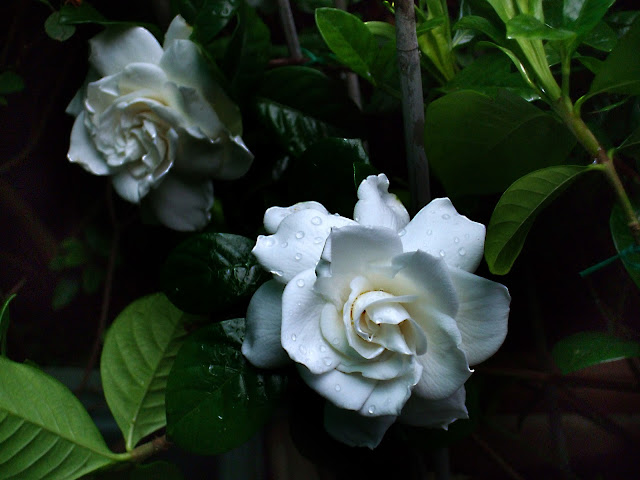